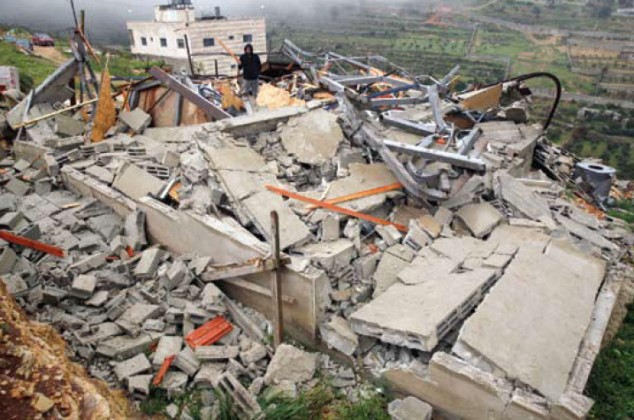 On 12 March 2016, Israeli warplanes fired 3 missiles at Asqalan military site of al-qasam Brigades (the armed wing of Hamas Movement), in al-Sayafa area, northwest of Beit Lahia, north of the Gaza Strip. As a result, the training site was destroyed, and the rubble and mud chunks flung over the houses to the northwestern side of the training site. One of the aforementioned houses belongs to Salman Mousa Hasan Abu Khousa and is built of tin plates on an area of 120 square meters. As a result, his children, Ayoub (12); Yasin (9); Israa’ (6) and Ikram (2). The wounded children were taken to the Indonesian Hospital in the northern Gaza Strip. Yasin and Israa’ sustained serious wounds due to severe brain haemorrhage, while the two other children sustained moderate wounds. Yasin was pronounced dead after 15 minutes of his arrival at the hospital. However, Israa was transferred to al-Shifa hospital to receive medical treatment in Gaza City. At approximately 13:45 on the same day, the Palestinian medical sources announced that Israa succumbed to her wounds.

In the context of airstrikes as well, on the same day, Israeli warplanes carried out 3 raids on 2 training sites and on al-Sourani Hill. However, no casualties were reported.

In the context of targeting border areas along the Gaza Strip, on 13 March 2016, Israeli forces stationed at the said fence, east of al-Shuja’iya neighbourhood, east of Gaza City, opened fire at Palestinian civilians collecting scraps. As a result, Jamal Zwayed (19), from al-Daraj neighbourhood, east of the city, sustained 4 bullet wounds to the left hand, belly and legs.

In the context of targeting Palestinian fishermen in the Gaza Strip sea, on 12 March 2016, Israeli gunboats stationed off the shore, northwest of Beit Lahia, north of the Gaza Strip, opened fire around Palestinian fishing boats sailing in the sea. A similar attack occurred on 13 March 2016, but neither casualties nor material damage were reported.

Israeli troops killed three Palestinians, and a fourth died of his wounds, in the West Bank this week.

On 14 March 2016, Israeli forces stationed at “Givat Kharsina” settlement’s intersection shot 2 Palestinian civilians dead, claiming they were willing to carry out a shooting attack at Israeli soldiers while they were waiting at a bus stop.

15 minutes later, a number of Israeli soldiers in the abovementioned place opened fire at a vehicle, inside of which, was Yusef al-Tardah (18), from Abu al-Jamal areas, west of Bani Na’im village, east of Hebron. As a result, the aforementioned person was shot dead. Israeli forces claimed that the vehicle was driving fast in the opposite direction, heading towards them.

On 15 March 2016, the Palestinian Ministry of Health announced that Nahed Mtair (24), from Qalandia refugee camp, north of occupied Jerusalem, succumbed to injuries he sustained earlier. The aforementioned person was wounded during confrontations in the refugee camp after 2 Israeli soldiers had moved into the camp in a car that was discovered and burnt by Palestinian young men then.

Israeli forces continued their efforts to create a Jewish majority in occupied East Jerusalem.
Siblings of a Palestinian who carried out a shooting attack were deported to the West Bank on grounds of collective punishment.

A clothing storehouse in al-Bareed suburb, north of the city of Jerusalem, was demolished. Israeli forces issued more administrative demolition orders against a number of houses under the pretext of non-licensing.

On Friday, 11 March 2016, dozens of youngsters from several areas in Ramallah and al-Beireh, gathered in the vicinity of Ofer prison, southwest of Ramallah, to organize a peaceful demonstration against the Israeli policies. After the protesters made their way towards the prison gate, Israeli forces closed the gate and deployed in the area. The protesters set fire to rubber tires and threw stones and empty bottles at Israeli soldiers, who immediately fired live bullets, metal bullets, tear gas canisters and sound bombs in reponse. As a result, a 24-year old civilian was hit with a metal bullet to the right elbow and was transported to Palestine Medical Complex in the city to receive treatment.

Following the Friday prayer, dozens of Palestinian civilians organized demonstrations in protest at the Israeli policies in the Occupied Palestinian Territories, at the western entrance to Selwad village, northeast of Ramallah; al-Taweel Mount, near “Psagot” settlement, east of al-Bireh; and at the southern entrance to al-Jalazonerefugee camp, north of Ramallah. Israeli soldiers used force to disperse the protesters by firing live bullets, metal bullets, tear gas canisters and sound bombs. As a result, many civilians suffered tear inhalation and others sustained bruises as Israeli soldiers beat them up.

At approximately 13:30 on Friday, 11 March 2016, dozens of youngsters made their way to the border fence between Gaza Strip and Israel, east of al-Shuja’iyah neighbourhood, east of the Gaza Strip. The protesters threw stones at Israeli soldiers stationed behind the sand barrios along the fence, due to which, Israeli forces opened fire at them. As a result, three protesters were wounded. Two of them were hit with live bullets, while the third was hit with a metal bullet.

Following the Friday prayers, on 11 March 2016, dozens of Palestinian civilians, Israeli and international human rights defenders and families from al-Nabi Saleh organized a demonstration in the center of al-Shuhada’ Square in al-Nabi Saleh village, northwest of Ramallah in protest against the annexation wall and settlement activities. They made their way in the village streets, raised Palestinian flags and chanted slogans condemning the Israeli occupation and the stressing the Palestinian inalienable rights. The protesters headed to the lands that Israeli settlers confiscated by force near “Halamish” settlement. When the protesters approached the aforementioned lands, Israeli forces fired live bullets, metal bullets, tear gas canisters and sound bombs at them. As a result, Naji Tameme (9) was hit with a tear gas canister to the right side, due to which, he was transported to Palestine Medical Complex in the city to receive treatment.

Following the Friday prayer on the aforementioned day, dozens of Palestinian civilians and Israeli and international human rights defenders organized demonstrations in protest against the annexation wall and settlement activities in Bi’in and Nil’in villages, west of Ramallah, and Kofur Qadoum village, northeast of Qalqilia. Israeli forces fired live bullets, metal bullets, tear gas canisters and sound bombs at the protestors to disperse them, and chased them. As a result, large numbers of civilians suffered tear gas inhalation and others sustained bruises as Israeli soldiers beat them up.

Due to the number and severity of Israeli human rights violations this week, the PCHR made several recommendations to the international community. Among these were a recommendation that the United Nations confirm that holding war criminals in the Palestinian-Israeli conflict is a precondition to achieve stability and peace in the regions, and that peace cannot be built at the expense of human rights.

In addition, PCHR calls upon the UN General Assembly and Human Rights Council to explicitly declare that the Israeli closure policy in Gaza and the annexation wall in the West Bank are illegal, and accordingly refer the two issues to the UN Security Council to impose sanctions on Israel to compel it to remove them