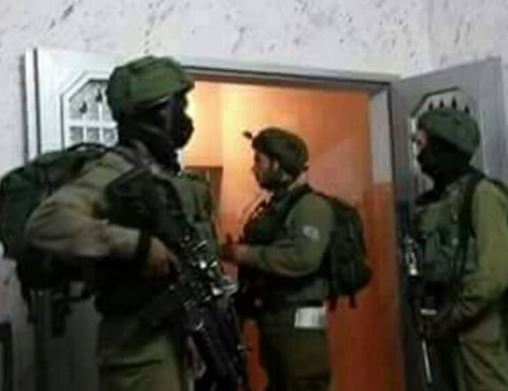 Updated: 05:16 – Israeli soldiers imposed, starting on Thursday at night, a tight siege on the town of Beit Fajjar, south of Bethlehem, completely isolating it and kidnapped one Palestinian. The soldiers also kidnapped eleven other Palestinians in the West Bank.The Israeli army said two Palestinian minors were arrested near the entrance to the industrial Zone of Shaar Binyamin colony, in central West Bank.

The army claimed the two walked towards a restricted area of the industrial zone before the soldiers stopped and searched them. and reportedly found knives with them.

Israeli Ynet News said an initial investigation by the army revealed that the two ‘intended to carry out a stabbing attack.’

The soldiers closed all major and minor roads of the town, completely isolating it, and prevented the Palestinians from entering or leaving it.

Bethlehem governor Jibril al-Bakri said the siege is an illegal act of collective punishment on the entire town, and all of its residents, in direct violation of international law and basic principles of human rights.

Al-Bakri added that the Israeli District Coordination Office made the decision to isolate Beit Fajjar, starting on Thursday evening and that the Israeli side said the siege comes in retaliation for the Thursday attack in Ariel colony, near Salfit in Central West Bank.

The incident led to the death of two Palestinians, who reportedly stabbed an Israeli soldier, in her twenties, causing moderate wounds.

The two Palestinians are from Beit Fajjar and have been identified as Ali Jamal Mohammad Taqatqa, 19, and Ali Abdul-Rahman al-Kar Thawabta, 20.

In addition, the soldiers kidnapped, on Friday morning, two young Palestinian men, identified as Ali Awad Abdul-Jabbar, and Osama Bassam Kharouf, near the al-Jalama roadblock, north of Jenin, in the northern part of the occupied West Bank.

The two Palestinians, from Sielet ath-Thaher near Jenin, were standing in an area near the roadblock awaiting the arrival of detainee Husam Abdul-Jabbar, after his release from an Israeli detention center.