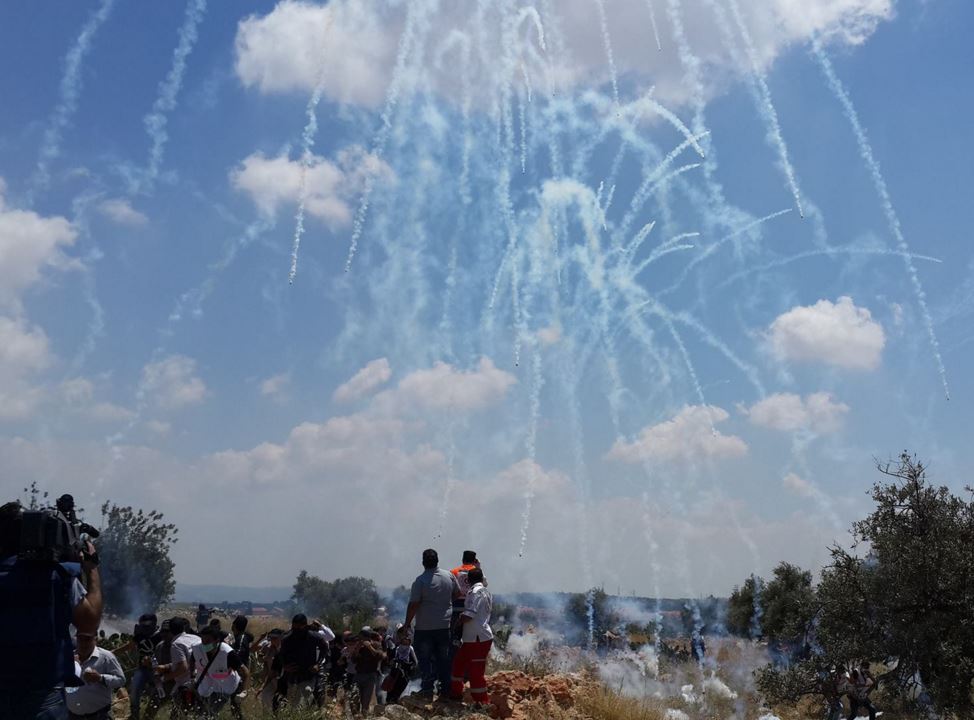 Israeli soldiers attacked Friday, the weekly nonviolent protest against the Annexation Wall and colonies, in Ni’lin village, west of the central West Bank city of Ramallah, causing dozens to suffer the effects of teargas inhalation. The Popular Committee in Ni’lin said the soldiers assaulted dozens of Palestinian, Israeli and international peace activists after marching from the center of the village towards the villagers’ orchards.

The protesters marched carrying posters of American peace activist Rachel Corrie, marking the 13th anniversary of her murder on the hands of Israeli soldiers in Rafah, in the southern parts of the Gaza Strip, and pictures of Tristan Anderson, the American peace activist who was seriously injured after a high-velocity Israeli gas bomb struck him in the forehead, on March 13 2009, causing cognitive impairment and physical disability.

Member of the Popular Committee in Ni’lin Mohammad ‘Amira said dozens of residents suffered the effects of tear gas inhalation, especially since the soldiers fired gas bombs that can hit areas more than 1000 meters away.

‘Many of those gas bombs struck homes, causing many Palestinians, including children, to suffer the effects of tear gas inhalation,’ he said, ‘This is the second week the soldiers use this type of gas bombs in the village.’

He also said that many protesters managed to overcome the Israeli military siege on the town, and reached the Annexation Wall, before raising Palestinian flags and marching against the ongoing Israeli violations.