Israeli Soldiers A Palestinian, Destroy A Monument, In Jenin 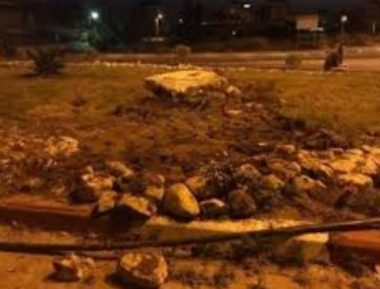 Israeli soldiers invaded, on Sunday at dawn, the northern West Bank city of Jenin, and installed many roadblocks around it, before abducting one Palestinian, and demolished a monument for a Palestinian, who was assassinated by Israeli agents in Athens, in 1986.

The soldiers installed many roadblocks in the western part of Jenin city, Jenin-Jaffa Road, and at roads leading to many villages, before stopping and searching dozens of cars, and interrogated many Palestinians while inspecting their ID cards.

The Jenin office of the Palestinian Prisoners’ Society (PPS) sad the soldiers abducted ‘Aref Wishahi, 22, from the al-Mothallath village, after stopping him at a roadblock installed at the junction of ‘Arraba town. It is worth mentioning that Nazzal, from Qabatia town near Jenin, was one of the founders of the Democratic Front for the Liberation of Palestine (DFLP), and was assassinated by Israeli agents in Athens on June 9th 1986.

Also at dawn, the soldiers abducted three Palestinians, including legislator Khaleda Jarrar, in the central West Bank district of Ramallah.