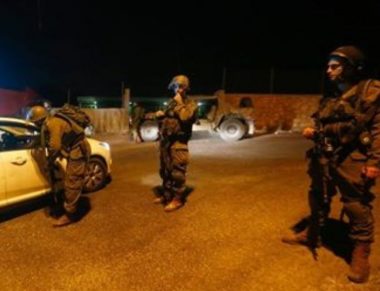 Israeli soldiers abducted, overnight, twelve Palestinians, including a legislator and a former political prisoner, in different parts of the occupied West Bank, the Palestinian Prisoners’ Society (PPS) has reported.

The PPS stated that the soldiers invaded and ransacked many homes in the southern West Bank governorate of Hebron, and abducted six Palestinians, identified as Issa Abu Ghazi, Mohammad al-Qassam, Hamed Jawabra, Morad Sharif, from the al-‘Arroub refugee camp, in addition to Abbas Natsha and Bassel Hawamda, from the Sammoa’ town.

In Ramallah, in central West Bank, the soldiers abducted legislator and senior political leader of the Popular Front for the Liberation of Palestine (PFLP) Khaleda Jarrar, in addition to the head of the Union of Palestinian Women’s Committee, Khitam Sa’afeen, and a former political prisoner, identified as Ehad Mas’oud, who was held by Israel for sixteen years.

It is worth mentioning that Jarrar, a democratically-elected legislator for the Palestinian Legislative Council (PLC), is a former political prisoner who was released from an Israeli prison in June of 2016, after being held for fifteen months.

Furthermore, the soldiers abducted Waseem Abu Yabes and Mohammad Sabateen, from their homes in Husan town, in Bethlehem governorate.

In Jenin, in the northern part of the West Bank, the soldiers abducted one Palestinian, identified as ‘Aref Wishahi, 22, from the al-Mothallath village, after stopping him at a roadblock installed at the junction of ‘Arraba town, and demolished a monument for a Palestinian, who was assassinated by Israeli agents in Athens, in 1986.

The soldiers also installed many roadblocks in the western part of Jenin city, Jenin-Jaffa Road, and at roads leading to many villages, before stopping and searching dozens of cars, and interrogated many Palestinians while inspecting their ID cards.