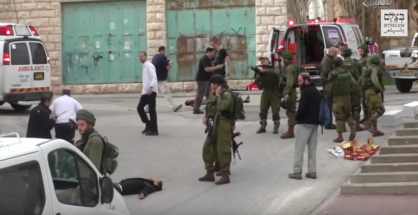 Israeli forces, on Tuesday night, broke into the home of the videographer who filmed an Israeli soldier executing a wounded Palestinian in cold blood, in Tel Rumeida, central Hebron, last week.

The videographer, activist Imad Abu Shamsiyya, said that soldiers broke into his home in Tel Rumeida, and inspected the cards of the local and international activists who were staying in the house, as well.

The activists gathered there after Israeli settlers directed death threats against Imad, as they published his photos with “Most Wanted” written on them, in addition to killing threats.

Last Thursday, according to the PNN, Imad recorded a shocking video showing an Israeli soldier, who was later identified as Elor Azaria, executing a helpless 21-year-old Palestinian who was already shot and bleeding, after an Israeli settler told him, “This asshole here is still breathing.”

At the same spot, 21-year-old Ramzi Qassrawi was also killed, with the military claiming that the two attempted a stabbing attack.

As for the soldier, Israeli forces claimed that he was suspended and sent to investigation, while his right-wing government is still defending his claims, saying, “He did the right thing at the right time.”