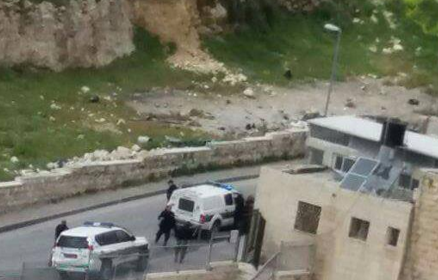 Palestinian medical sources in Jerusalem have reported, on Thursday evening, that Israeli soldiers shot and injured an elderly Palestinian woman, while sitting in front of her home in Ein al-Louza neighborhood in Silwan town, in occupied Jerusalem.

The sources said that the woman, 63 years of age, was shot with a rubber-coated steel bullet in her back, while sitting in front of her home.

Eyewitnesses said the soldiers invaded the neighborhood, and clashed with dozens of youngsters, who hurled stones on them; the soldiers fired many gas bombs, concussion grenades, rubber-coated steel bullets and several flares.

In addition, the soldiers invaded a school in Ras al-‘Amoud in Silwan, and searched several homes.

In related news, the soldiers forced Ahmad Nasser Rokin, 19, from Jerusalem, out of the city for four months under the “emergency law” and gave him two hours to leave the occupied city.