Soldier who Executed Palestinian Will Not Be Charged With Murder 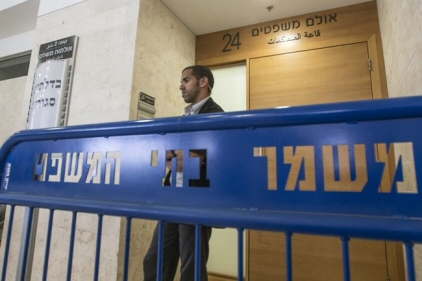 The Israeli army ruled, Thursday, that an Israeli soldier who shot dead a wounded Palestinian in Hebron, last week, would be tried on charges of manslaughter, and not, as had been widely expected, those of murder.

While it was not initially clear why the soldier would be tried on the lighter charges, the announcement came after a week of political turbulence in Israel in which many politicians who initially condemned the killing of Abed al-Fattah al-Sharif later appeared to reverse their positions.

According to Israeli daily Haaretz, Israeli military prosecutor Aduram Riegler told the Israeli military court Thursday the soldier was suspected of deliberately shooting al-Sharif “without need from an operational standpoint.”

Al-Sharif was lying on the ground severely wounded when he was killed. He had earlier been gunned down after allegedly stabbing an Israeli soldier.

Riegler said during the hearing that evidence indicated that contrary to the soldier’s claims, he had not shot al-Sharif out of fear for his life.

“In response to a question by the company commander, who was there and stood near the terrorist and asked the suspect why he opened fire, the suspect replied: ‘the terrorist was alive, he deserved to die,'” Haaretz quoted Riegler as saying.

During the hearing, the commander of the soldier’s battalion said the soldier had been immediately suspended from combat duty because he lied about the reason he opened fire, Haaretz reported. The prosecutor called for an extension of the soldier’s remand by at least another week.

Prior to Thursday’s hearing, it had been widely expected the soldier would be charged with murder, the worst offense a soldier in Israel’s army may be charged with.

However, the army had not confirmed this, and Riegler said Tuesday that “murder, manslaughter and causing death through negligence were among the possibilities under consideration.”

While politicians initially roundly condemned the killing in Hebron last week — which the UN branded an “extrajudicial execution” — much of their initial language has since been either reversed or watered down. Israeli Prime Minister Benjamin Netanyahu at first said the killing did not represent the Israeli army’s values, but has since sought to be seen as closely allied to Israel’s armed forces, saying on Wednesday that the army and police “do not engage in executions.”

He said: “Israel’s soldiers and police officers defend themselves and innocent civilians with the highest moral standards against bloodthirsty terrorists who come to murder them.”

PNN reported that, according to Jpost, the Israeli military court requested that the Israeli soldier remain in military police custody for an additional seven days, before his release.