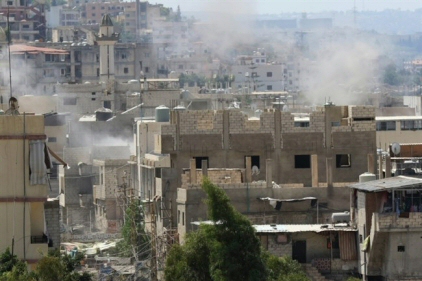 One Palestinian was killed and several others injured, Friday, amid heavy clashes between rival factions at the Palestinian refugee camp of Ain al-Helweh, in southern Lebanon, Lebanese state media reported.

A dispute between members of the Fateh Movement and “Islamist militants” escalated into gunfire for the second time this week, with sounds of RPG blasts also being reported Friday.

Several families reportedly fled the camp as a result of the clashes.

“Palestinian-Lebanese contacts are underway in a bid to pacify the situation and contain the tensions,” said NNA.

While fighting had died down Friday night, Reuters reported gunfire breaking out again, Saturday morning. The renewed violence in Ain al-Helweh comes after two men were killed in clashes last week in the same camp.

It was not immediately clear if there is a connection between the two rounds of violence.

Ain al-Helweh, which lies near the Lebanese city of Sidon, has become increasingly unstable over the past year, with violent clashes last summer displacing as many as 3,000 Palestinian refugees.

Lebanon’s Palestinian camps mainly fall outside the jurisdiction of the Lebanese security services. More than 54,000 registered Palestinian refugees live in the camp, who have been joined in recent years by thousands of Palestinians fleeing the fighting in Syria.

More than 450,000 Palestinians are registered in Lebanon with UNRWA. Most live in squalid conditions in 12 official refugee camps and face a variety of legal restrictions, including on their employment.