3 Israelis reported killed; 5 wounded in shooting at Tel Aviv market next to Ministry of Defense 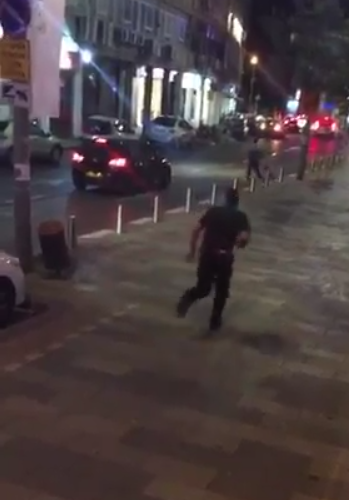 Israeli sources have reported that 3 Israeli civilians have been killed, and at least 5 wounded, as shots were heard at a market in central Tel Aviv Wednesday evening.

At the time of this report, few details are known about the incident – the identity of the alleged shooter has not been released. The Israeli police reported that the alleged attacker has been “neutralized”, and reporters on the scene say that they saw him lying on the sidewalk handcuffed.

Police say they believe there is a second suspect, and have deployed officers into the surrounding neighborhoods in a search.

Israeli police also stated that they are considering the shooting to be a terrorist attack.

The incident took place Wednesday evening at Sarona market, which opened in 2015 and calls itself Israel’s “biggest indoor food market”.

There are 89 stores and stalls in the market, and owners estimate that the market gets around 10,000 visitors a day.

AmichaiStein on Twitter published a few seconds of video of a police officer firing several shots, although the video does not show any person on the block where the officer is standing, so it is unclear at whom he is shooting.