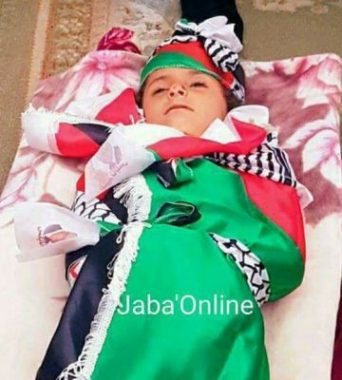 On Saturday evening, hundreds Of Palestinians participated in the funeral ceremony of Aseel Tareq Abu ‘Oun, 8, who was killed after being rammed by an Israeli settler’s car, near Furush Beit Dajan area, east of the northern West Bank city of Nablus.

The funeral procession took off from Rafidia Hospital, in Nablus, heading towards Jaba’ town, southwest of Jenin, in the northern part of the occupied West Bank.

The mourners marched denouncing the fatal incident, and said that the child was killed due to Israel’s illegal colonialist activities, especially since Israeli ‘settlements’ are illegally built on Palestinian land in the occupied West Bank, and are the sources of violence and oppression against the Palestinian people, as many colonist settlers recklessly drive while passing through, or near, Palestinian communities, without any regard to the lives native inhabitants.

Aseel Abu ‘Oun was from Jaba’ town, south of Jenin, in the northern part of the occupied West Bank.

The child’s uncle Dirar Abu ‘Oun, said the settler was driving on street more than 10 meters wide, while the child was walking along with her brother on the sidewalk.

“How can the Israeli driver accidentally ram her with his car on a very wide road, and she was on the sidewalk, designated for pedestrians” he stated, “The settler also tried to flee the scene when the child’s father, who was in a nearby agricultural land, rushed to her rescue, and prevented him from fleeing.” An 8-year-old Palestinian girl was killed on Saturday after being struck by an Israeli vehicle in the Nablus district of the northern occupied West Bank, according to Israeli sources.

Palestinian medical sources said that the girl was run over by an Israeli settler’s vehicle near the Furush Beit Dajan village, in the Nablus district.

Maan further reports that a crew from Israel’s Magen David Adom national emergency service arrived at the scene and evacuated the girl to the hospital, according to al-Samri. However, the girl was pronounced dead on arrival.

Palestinian medical sources later identified the child as Aseel Tareq Abu ‘Oun from the village of Jaba’, in the northern West Bank district of Jenin.

It remained unclear whether the driver had fled or remained at the scene.

A spokesperson for Magen David Adom Israeli medical services was not immediately available for comment.

Incidents involving Israeli settlers hitting Palestinians in the occupied Palestinian territory are a relatively regular occurrence, and are usually treated by Israeli security forces as accidents, even in cases when witnesses claim the car ramming were deliberate.