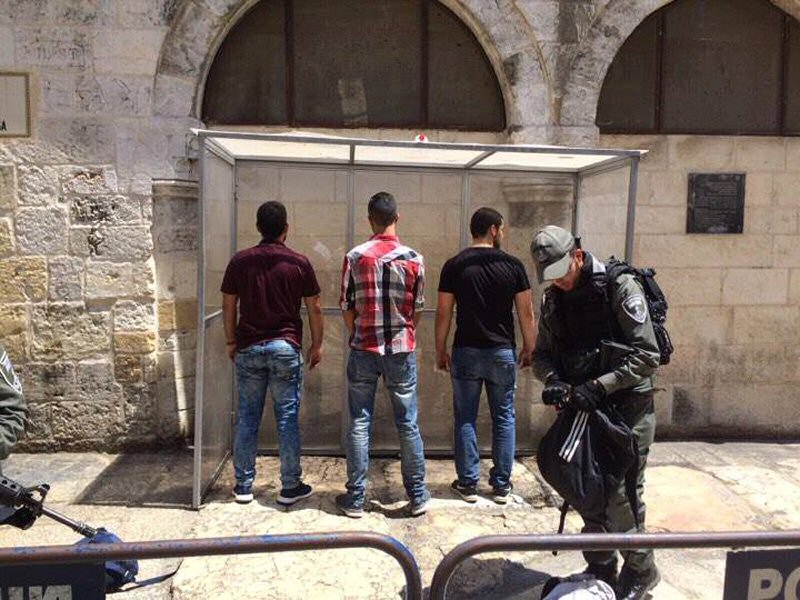 Israeli forces continued with systematic crimes in the occupied Palestinian territory (oPt) for the week of 17 – 23 August, 2017.

Israeli forces killed a Palestinian child at Za’atarah Checkpoint, south of Nablus. 5 Palestinian civilians, including a child, were wounded in the West Bank and Gaza Strip.

In the West Bank, on 19 August 2017, Israeli forces killed Qotayabah Zahran (17) from ‘Alar village, north of Tulkarm.  The abovementioned was walking near a bus station when an Israeli soldier shouted at him to stop.  However, the soldier stationed inside the watchtower established at the checkpoint directly opened fire at Zahran and killed him.  The Israeli forces claimed that the abovementioned child attempted to stab one of the Israeli border guard officers, who were securing the checkpoint, so he was neutralized.

In the same context, during the reporting period, Israeli forces wounded 2 Palestinian civilians after opening fire at them when the Israeli forces moved into Jenin refugee camp, north of the West Bank, to carry out an arrest campaign.

In the Gaza Strip, border areas witnessed protests against the unjust closure imposed on the Gaza population.  During these protests, Israeli forces used force against the protestors, particularly when dispersing them.  As a result, 3 Palestinian civilians, including a child, were wounded.  One of them was wounded with a live bullet to the shoulder while the two others were wounded after being directly hit with sound bombs.

Concerning attacks on fishermen, on 21 August 2017, Israeli gunboats sporadically opened fire at and chased Palestinian fishing boats, northwest of Beit Lahia village, north of the Gaza Strip. The shooting recurred in the abovementioned area on 22 and 23 August 2017.

During the reporting period, Israeli forces conducted at least 43 military incursions into Palestinian communities in the West Bank, and 10 ones in Jerusalem. During these incursions, Israeli forces arrested at least 49 Palestinian civilians, including 14 children. Twenty seven of them, including 11 children, were arrested in occupied Jerusalem and its suburbs while two children were arrested during a peaceful protest in Qalqiliya.

As part of the Israeli forces’ collective punishment policy against the families of Palestinian civilians who are accused of carrying out attacks against Israeli soldiers or/and settlers.  On 17 August 2017, Israeli forces blew up te first floor of a house belonging to the family of ‘Adel ‘Ankoush in Deir Abu Mesh’al, northwest of Ramallah.  Asa  result, the ground floor sustained severe damage as well as a nearby house.  It should be mentioned that on 16 June 2017 the Israeli forces killed the above-mentioned civilian along with his two friends after a stabbing and shooting attack in occupied Jerusalem, resulting in the killing of an Israeli female soldier.

In the context of house demolitions, On 22 August 2017, Israeli Municipality bulldozers demolished a house belonging to ‘Abed al-Kareem Abu Sneinah in al-Bistan neighborhood in Silwan village, south of occupied Jerusalem’s Old City, for the 2nd time within one week. They then demolished the house. It should be noted that on Tuesday, 15 August 2017, the Israeli bulldozers demolished 2 houses belonging to Abu Sneinah family. Within one week, Abu Sinanh family along with activists managed to remove the rubble and re-built the house, but the Israeli forces again demolished the house. The Israeli authorities planned to demolish all the houses in al-Bostan neighborhood in favor of establishing “King Park” on its rubble.

According to PCHR’s investigation and eyewitnesses’ accounts, at approximately 02:00 on Thursday, 17 August 2017, Israeli forces backed by several military jeeps and an engineering unit moved into Deir Abu Mesh’al village, northwest of Ramallah. They then surrounded a 2-storey house belonging to the family of ‘Adel Hasan Ahmed ‘Ankoush. The house was built on an area of 150 square meters, sheltering 6 members, including 4 children. Many soldiers raided the second floor in the house while the engineering unit planted explosives inside and blew it up. As a result, the ground floor sustained serious damage in addition to a nearby house belonging to Mustafa Sobhi Far as the bedroom wall collapsed.

It should be noted that on 16 June 2017, the Israeli forces killed ‘Adel and two of his friends namely Bara’a Ibrahim Saleh ‘Ata and Osama Ahmed Dahdouh ‘Ata from Deir Abu Mesh’al  village, after they carried out a stab and shooting attack against al-Sultan Suleiman Street at the northern entrance to Bab al-Amoud (Damascus Gate) in East Jerusalem. The attack caused the death of an Israeli female soldier. Moreover, the Israeli forces raided the houses of the 3 killed civilians on 17 June 2017 and orally informed them of the demolition decision of their houses after they took thir measurements.

It should be noted that, on Tuesday, 15 August 2017, the Israeli bulldozers demolished 2 houses belonging to Abu Sneinah family. During one week, Abu Sinanh family along with activists removed the rubble and re-built the house, but the Israeli forces demolished the house again. The Israeli authorities planned to demolish all houses in al-Bostan neighborhood in favor of establishing “King Park” as since 2005, the Israeli authorities have distributed notices to residents. Over the past period, the residents were able to delay and abolish demolition orders through popular campaigns and legal proceedings. All the decisions are in effect now after the Israeli the municipality rejected all the plans submitted by the residents.

It should be noted that the Abovementioned School was built after Zawahra family donated a five-and-a-half-dunum plot of land in the centre of the Beit Ta’mour complex. The school administration was informed by the Israeli authorities to stop construction work in the school under the pretext of non-licensing. However, the project was completed, and six out of eight caravans were placed one day before the beginning of the new school year. Khirbet Jub al-Deeb is located in an area under the full Israeli control, so its residents should obtain permits from the Israeli Civil Administration to enable them to build and use the land for any purpose. This is considered impossible because of the impossible conditions imposed by the Israeli authorities in this regard, not to mention the Israeli Civil Administration’s policy of deliberately neglecting planning and developing the Palestinian villages located within the ‘C’ areas such as Jub al-Deeb to force its residents to leave voluntarily and move from their lands and villages to other areas. In the past years, the Israeli authorities have tightened their grip on the village residents to force them to leave, targeting three houses belonging to the residents under the pretext of non-licensing. Moreover, five other families left the village because they were deprived of their rights in the village and forced them to live in other areas. The rest of the village’s houses are still under threat because of non- licensing.