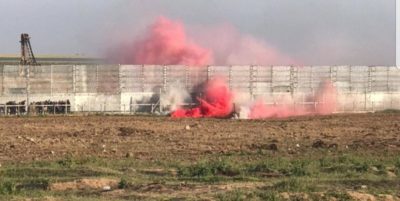 At least 83 Palestinian civilians were wounded by Israeli live gunfire fired against non-violent demonstrators in eastern Gaza on Friday, according to the Palestinian Ministry of Health.

“At least 83 Palestinians were wounded by live ammunition as a result of the Israeli occupation forces’ aggression against the participants in the activities of the 53rd anniversary of the march of return and breaking the peaceful siege,” said Ashraf al-Qadra, spokesman for the Health Ministry.

Among the wounded were three who were critically wounded by live gunfire, according to al-Qidra.

An AFP correspondent reported that dozens of demonstrators tried to cross the fence, and soldiers stationed in sniper towers fired live bullets and tear gas canisters directly at the demonstrators.

A Palestinian eyewitness reported that the Israeli army used several tear gas canisters “from which red smoke came out, which appeared to be poisonous gas.”

Some protesters lit tires during protests.

Several thousand protesters participated in the weekly demonstration, which is in its 53rd week, after beginning on 30 March 2018, demanding the lifting of the Israeli siege imposed more than a decade ago.

The weekly protest also calls for the “right of return” for refugees who were displaced from their homes in what is now Israel 70 years ago.

The head of the Hamas political bureau Ismail Haniyya said during Friday sermon that “our people will not retreat from the march of return. We are moving in three ways to pressure the occupation to respond to the demands of the Palestinian people There is positive movement in the talks of calm, unity and our strategic choice for reconciliation, legitimacy and the formation of a government of all [Palestinian] factions.”

“Our cause is not merely humanitarian, it is a matter of national liberation.”

Haniyya’s statement came after Hamas and Israel reached an understanding, mediated by Israel, to hold to a tentative truce after a wave of escalation by Israeli forces over the past month – including hundreds of airstrikes and the amassing of hundreds of tanks at the Gaza-Israel border.