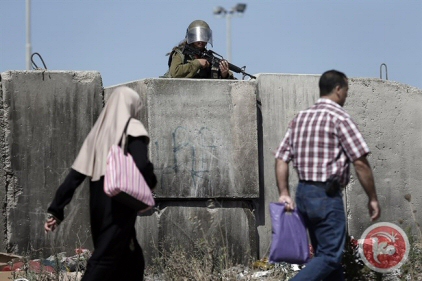 The Israeli Coordinator of Government Activities in the Territories (COGAT), which implements Israeli policies in the occupied Palestinian territory, issued an order freezing more than 83,000 permits allowing Palestinians to enter Israel and occupied East Jerusalem, the organization said on Thursday.

The freeze comes in the wake of a deadly shooting attack in Tel Aviv on Wednesday night, in which four Israelis were killed and six wounded.

Two Palestinian suspects were detained on the scene, and the Israeli army carried out an unspecified number of detentions in the suspected assailants’ hometown of Yatta in the southern occupied West Bank, also closing off the entrance to the town.”

In accordance with the security assessment taken last night by the Prime Minister (Benjamin Netanyahu), the Minister of Defense and the Army Chief of Staff, the Coordinator of Government Activities in the Territories, Major General Yoav (Poly) Mordechai, has instructed on the freezing of 204 permits of the terrorists’ relatives,” COGAT said in a statement on Thursday.”

In addition, all of the permits for Ramadan, especially permits for family visits from Judea and Samaria to Israel, are frozen,” the statement read, using the Israeli term for the occupied West Bank. “Accordingly, 83,000 permits are frozen.”COGAT added that all agreements allowing Gaza residents to travel to East Jerusalem to pray at the Al-Aqsa Mosque had also been suspended, saying that “all the steps for the Gazan residents for Ramadan are frozen.”

On average, 200 Gazans have been allowed to travel to Al-Aqsa as part of the ceasefire deal between Palestinian militant groups and Israel which ended the 2014 war on Gaza. However, the agreement has been regularly suspended over Israeli claims regarding security.

According to Ma’an, the vast majority of the permits were issued by Israeli army commander Gadi Eizenkot and approved by the recently-appointed Israeli Minister of Defense Avigdor Lieberman to allow Palestinians to go to the Al-Aqsa Mosque in East Jerusalem during the Muslim holy month of Ramadan.