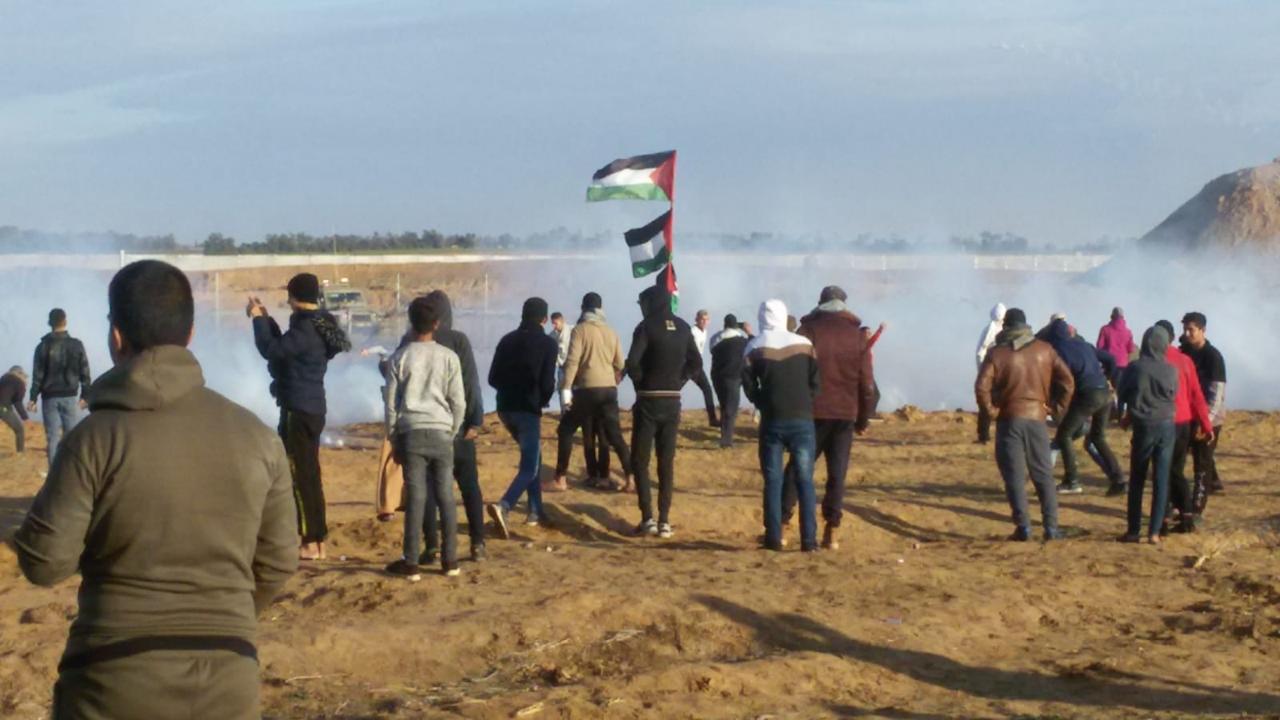 The Palestinian Center for Human Rights (PCHR): Thirty-nine Palestinian civilians, including 11 children and a woman, were shot and injured by Israeli occupation forces’ (IOF) fire against peaceful protestors at the 86th Great March of Return (GMR) in eastern Gaza Strip, this Friday, 27 December 2019.

Despite of general calmness of protests in most of the areas and the decrease in numbers of participants due to the cold and rainy weather, IOF continued the use of excessive force against peaceful protestors, as 5 civilians, from eastern Rafah, were shot with live bullets; one of them was deemed in serious condition.

Moreover, IOF targeted protests with rubber bullets and tear gas canisters, mainly targeting their upper bodies and heads. As a result, many civilians were injured, including a young man who was shot with a rubber bullet in his right eye.

The Supreme National Authority of GMR called for today’s protests under the slogan “Martyrs’ Blood Draws the Freedom Path” on the anniversary of the 2018 Israeli aggression against the Gaza Strip, which continued for 23 days, and resulted in hundreds of killings and injuries.

At approximately 14:00, Palestinian civilians head towards the five GMR encampments in the eastern Gaza Strip to join today’s protest which lasted to 17:00, in the last Friday of this year.

The National Authority announced the suspension of the demonstrations until the next Earth Day, which is celebrated on 30 March of each year, which would mark the second anniversary of the GMR. The National Authority also declared that protests would thereafter take place on a monthly basis and on national events.

Since GMR started on 30 March 2018, PCHR documented that 215 civilians were killed by IOF, including 47 children, 2 women, 9 persons with disabilities, 4 paramedics and 2 journalists.

Northern Gaza Strip: demonstrations took off in eastern Jabalia, and some protestors attempted to throw stones at IOF stationed along the border fence. IOF shot and injured 3 civilians, including a child, with live bullets.

Gaza City: hundreds of civilians took part in protests at Malaka area in eastern Gaza City. No casualties were reported.

Central Gaza Strip: dozens of young men headed to eastern al-Buraij refugee camp and gathered adjacent to the border fence at a range varying between 0 – 300 meters.

The protestors threw stones and sound bombs at IOF, who responded with live and rubber bullets and tear gas canisters and pumped wastewater at the protestors.

As a result, 2 civilians sustained rubber bullet wounds, including Sa’ed Ahmed Tawfiq Mahani (29), from Gaza City who was shot with a rubber bullet in his right eye. Mahani was transferred to Eye Specialty Hospital in Gaza City. Moreover, a number of civilians suffocated due to tear gas inhalation.

Khan Younis:  Hundreds of civilians joined today’s protests in Khuza’ah area in eastern Khan Younis. Dozens gathered near the border fence and attempted to throw stones and Molotov cocktails. IOF fired rubber bullets and tear gas canisters at them. As a result, 14 civilians, including 7 children, were shot with rubber bullets and tear gas canisters while dozens suffocated due to tear gas inhalation.

Rafah: hundreds of protestors gathered in eastern al-Shawka neighborhood while others remained at the protest encampment where speeches and theatrical performances were held.

Dozens attempted to approach the fence and set tires on fire and threw stones. IOF fired live and rubber bullets and tear gas canisters at protestors.

As a result, 20 civilians, including 3 children and a woman, were injured: 5 were shot with live bullets; one of them was deemed in serious condition, 12 were shot with rubber bullets, and 3 were hit with tear gas canisters.