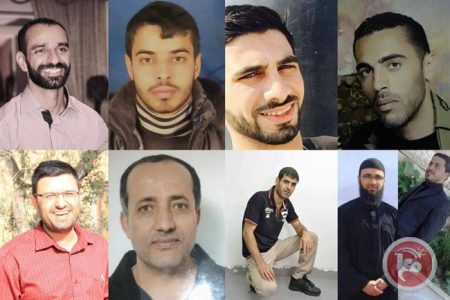 Nine Palestinian detainees continued their open hunger strikes in Israeli prisons on Monday, according to Sawt al-Asra (Voice of the Prisoners) radio.

Protesting for various reasons, the detainees have all refused food until their demands have been met by Israeli authorities.

Four of the nine hunger strikers have been protesting being held in solitary confinement, according to the radio station, Ma’an reports.

19-year-old Anas Abd al-Majeed Shadid, from the northern occupied West Bank village of Dura, has been on hunger strike for 35 days, in protest of his solitary confinement, while Majd Hassan Abu Shamla, 24, and Hassan Ali Rabayaa, 31, both from the Jenin district, continued their hunger strikes for the 27th day.

Mosab Manasra, from Hebron, continued his trike for the seventh day, also in protest of his solitary confinement.

The two have been protesting to end the mistreatment of Palestinian female prisoners in the Damon detention center.

When he began his hunger strike, al-Isawidemanded the transfer of the prisoners at Damon to a detention facility closer to the courts in which the detainees are tried, that the prisoners be provided with appropriate medical treatment, and that international NGO Doctors Without Borders (MSF) be allowed to visit the prisoners.

Al-Isawigained global recognition in 2012 when he began a hunger strike to protest being redetained by Israel after he was freed as part of the 2011 Gilad Shalit deal.

Upon signing a deal guaranteeing his release, he ended his strike in April of 2013, after 266 days without food.

Also continuing open hunger strikes on Monday were three Palestinian detainees protesting Israel’s policy of ‘administrative detention’, which allows Israeli authorities to hold Palestinians for an indefinite period of time without disclosing any evidence that could justify their detentions.

The three were identified by Sawt al-Asra as Tamer Sabaana and Ahmad al-Salatna, from Jenin, who began their strikes on Sunday, and Ahmad Mohammad Hussien Abu Fara, from the southern occupied West Bank city of Hebron, who was being held in Ramla prison hospital as he continued his hunger strike for the 35th day, against his administrative detention.

Meanwhile, Palestinian officials in Gaza organized a sit-in protest on Monday, in front of the International Committee of the Red Cross (ICRC) office in Gaza, in solidarity with the nine hunger-striking detainees. Abdelhamid Hamad, a member of the central committee of the Democratic Front for the Liberation of Palestine (DFLP) spoke at the sit-in, expressing his “rejection of all racist Israeli procedures conducted against Palestinian prisoners.”

He also praised the “high spirits” in which the hunger-striking detainees were facing various Israeli prison policies and procedures.

Hamad added that the conditions in which Palestinian prisoners live under continue to worsen, and that “Israeli procedures violate all international rights laws regarding prisoners’ treatment.”

Hamad personally sent his regards to hunger-striking prisoners al-Isawiand Sanawbar, who are members of DFLP. He concluded his remarks by calling for national unity, and popular and media support for Palestinian prisoners in their efforts to “halt the Israeli injustice and expose Israeli practices against Palestinian prisoners.”

Scores of Palestinian prisoners have launched hunger strikes, over the past year, in protest of administrative detention or the conditions of their incarceration. The most prominent hunger strikers included Muhammad al-Qiq, Bilal Kayid, and Muhammad and Mahmoud Balboul.

According to Addameer, 7,000 Palestinians were being held in Israeli prisons, as of August. The prisoners rights group estimates that 40 percent of Palestinian men have been detained by Israel at some point in their lives.

In Human Interest: 2017 – The Year of Prisoners’ Freedom: Challenges and Ideas for Action by Wael Jaghoub