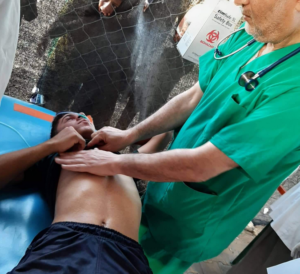 According to medical sources, some of the injured being treated in field hospitals, while others had to be transferred to hospital for medical care.

According to the Palestinian Center for Human Rights, 95 people were injured by Israeli forces, including 33 children, 1 journalist, and 4 women, one of which was a volunteer medic

PCHR has documented that Israeli soldiers have killed 207 Palestinians, including 44 children, 2 women and 9 Palestinians with special needs, in addition to 4 medics and 2 journalists, since March 30th, 2018.

The Great March of Return protests began on March 30, 2018, in which the nearly 2 million Palestinians in Gaza started asserting their right to return to their ancestral homes in pre-1948 Palestine, as well as calling for the complete lifting the illegal Israeli siege of Gaza.

According to Protocol 1 of the Geneva Convention, it is illegal to target civilians, which Israel has been doing since the outset of the demonstrations.

According to Article 11 of UN Resolution 194, the refugees living in Gaza have the right to return to the land they and their ancestors were forcefully evicted from in 1948, now called Israel.