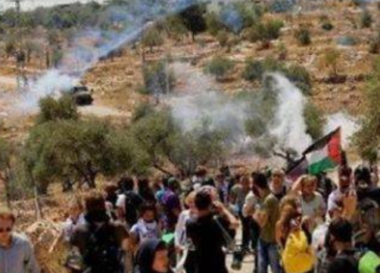 The locals, accompanied by Israeli and international peace activists, marched from the village, heading to their lands, isolated behind the illegal Annexation Wall.

Media sources said the soldiers fired many gas bombs and concussion grenades at the protesters, causing many to suffer the effects of teargas inhalation.

Ni’lin, along with Bil’in and Nabi Saleh, is among many Palestinian villages that have been holding ongoing weekly processions against the illegal Israeli occupation, its Annexation Wall and colonies, in the occupied West Bank.