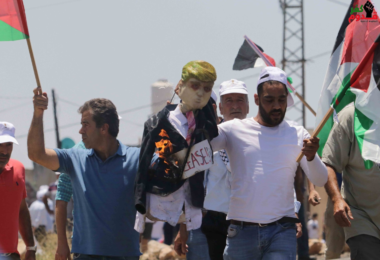 Today’s procession marks the eighth year of protests, demanding the army to reopen the town’s main road, which was blockaded sixteen years ago, to enable easy access for illegal Israeli colonialist settlers, driving to and from “Kedumim” colony, which was built on Palestinian lands.

The protesters marched carrying Palestinian flags, and chanting slogans against the ongoing Israeli occupation of Palestine, its illegal colonies, and the so-called “Deal of the Century,” in addition to the “Bahrain Conference,” and all attempts to bury and deny the legitimate rights of liberation and independence, and the Right of Return of the Palestinian refugees.

Morad Eshteiwi, the media coordinator of the Popular Committee against the Annexation Wall and Colonies in Kufur Qaddoum, said the soldiers resorted to the excessive use of force against the protesters, and fired many rubber-coated steel bullets and gas bombs.

He added that four young men were shot with rubber-coated steel bullets, and several Palestinians suffered the effects of teargas inhalation.