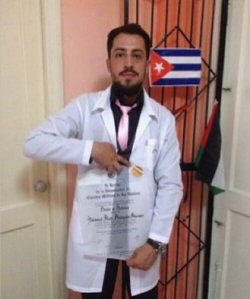 Muhammad’s project represents what he dreams for the Palestinian health system in the future. “I went through many difficulties, but today I have the best reward of seeing my project come true,” he says. Credit: personal archive

Even though “Project Cuba” is only four month old, it was still enough to offer 300 free medical visits for Palestinian refugees living in Aida camp in Bethlehem, home to 5,000 Palestinians who were expelled from their homes after the establishment of the State of Israel in 1948, and the place where Dr. Muhammad Abu Srour was born and raised.

Despite all the difficulties, he got a scholarship, traveled to Cuba and made the dream of studying medicine at the University of Medical Sciences of La Habana, one of the most prestigious in the area. For eight years he lived far from the family, faced barriers such as the language and the sacrifice of his parents, who with great sweat managed to cover his son’s health and food expenses during this time.

After finishing his specialization and residency in Pediatrics, Muhammad returned to live in Palestine and today works at the Baby Caritas hospital, which is in the same city where he was born. About 330,000 people under the age of 14 live in the southern West Bank. And it is the only hospital in the region that cares exclusively for children. But the pediatrician felt that he needed to do a little more for where he was born and suffered during childhood and adolescence with a rather precarious health system. That is why in October 2018 Muhammad materialized the idea of ​​the project, which alone would provide medical care to those who need it. “The idea came especially from my love for Cuba’s health system, which is based on family medicine. I learned this during my studies and wanted to put into practice attending the Palestinians who really need it, “he said. Between shifts at the hospital where he works professionally and a few sleepless nights, Muhammad manages to reconcile the agenda and visit the families served by the project. The pediatrician has a list of the contacts of all the families who live in Aida and the residents contact him by telephone when necessary.

“My care is not just about visiting families. I make analyzes of the entire health situation of the camp for future projects, health campaigns and the environment, and at the moment I have 10 patients in chronic situation who need special care, “concluded the pediatrician. According to Muhammad, the complicated childhood living in the midst of the decades-long Israeli-Palestinian conflict only gave him the strength to strive even harder to achieve his goals. “We need to make negative experiences positive for our own personal growth. I went through many difficulties, but today I have the best reward of seeing my project come true. There is nothing to pay to see the positive result in the treatment of my patients, it is a unique feeling and a duty of mine as a doctor. ” With no financial backing from the government, the young 27-year-old doctor is considering leaving Palestine only to improve his academic knowledge. And assured that he will continue working voluntarily to contribute to the development of his homeland. “In the future I want to see the Palestinian population enjoying a free and inclusive community health system.”