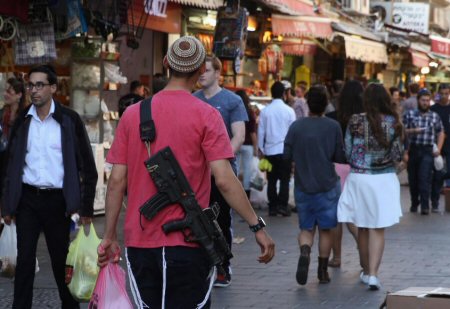 The Palestinian Liberation Organization’s (PLO) National Office for the Defense of Land and Resistance of Settlement said, on Saturday, that the Israeli government provides full support for illegal settlement outposts and for settlers’ gun ownership.

According to the office’s weekly report on Israeli settlement activities, a number of Israeli ministries and government agencies have been allocating hundreds of millions of shekels to support the construction of illegal settlement areas, as well as settlement outposts.

The report confirmed, according to Ma’an News Agency, the extent of the Israeli government’s involvement in the “theft” of Palestinian land and the hate crimes carried out by Israeli settlers towards Palestinians and their private property.

The Israeli government plans to ease restrictions on Israeli settler’s gun ownership in the near future, through legal changes that would make all Israeli citizens with firearms training eligible for a gun permit.

The proposed changes would apply in particular to Israeli settlers living near Israel’s West Bank apartheid wall, which cuts through the Israeli-occupied West Bank.

Israel began building the separation wall with concrete slabs, fences, and barbed-wire inside the occupied West Bank in 2002, at the height of the Second Intifada, claiming it was crucial for security. The wall left Palestinian neighborhoods stranded on both sides of the barrier and isolating communities from their agricultural lands.

According to Haaretz news outlet, about 145,000 Israelis currently hold gun ownership permits, not including Israeli soldiers and police personnel.

Sources added that Amir Ohana, a member of the Israeli Knesset, of the right-wing Likud political party, said that armed citizens can support Israeli forces against what he described as “terror incidents.”

Earlier this year, the Shin Bet, Israel’s internal intelligence agency, reported a spike in Israeli hate crimes against Palestinians, in 2018. The report stated there were 13 attacks in the first four months of this year, though Palestinians report the number to be much higher.

According to the United Nations Office for the Coordination of Humanitarian Affairs (OCHA), there were a total of 107 reported settler attacks against Palestinians and their properties in the West Bank and occupied East Jerusalem, in 2016.

Known as “price tag” attacks, extremist Israeli settlers use violent acts of retribution on Palestinians and their property, to demonstrate their opposition to Israeli restrictions on settlements and their outposts in the occupied West Bank.

Between 500,000 and 600,000 Israelis live in Jewish-only settlements across occupied East Jerusalem and the West Bank, in violation of international law, with recent announcements of settlement expansion provoking condemnation from the international community.

The support of the Israeli government to fund more Israeli outposts as well as easing gun ownership laws, particularly for Israeli settlers, may increase the number of violent attacks committed against Palestinians and their lands in the coming years.