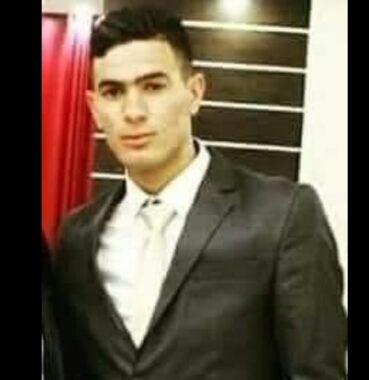 The Israeli army handed, on Tuesday evening, the body of a slain young Palestinian man to his family, a month after killing him and holding his corpse.

Ahmad Jibril, the head of the Emergency Department at the Nablus branch of the Palestinian Red Crescent Society (PRCS), in northern West Bank, said PRCS medics were handed the corpse of Mohammad Farid Ali Hasan, 20, at the Huwwara Israeli military base, south of Nablus, and moved it to Rafidia Hospital in the city.

It is worth mentioning that Mohammad was killed by the Israeli army on July 3rd, 2021, and more than 25 Palestinians were injured in the southern area of Qusra village, south of Nablus. Mohammad was shot with a live round in the chest while standing on the rooftop of his home and died from his serious wounds before the soldiers took his corpse.

The incident took place after the Palestinians intercepted and stopped and infiltration by a group of illegal Israeli colonizers who attacked the residents and their homes, before the soldiers invaded the town and started firing live rounds, rubber-coated steel bullets, gas bombs, and concussion grenades at the Palestinians and surrounding homes.