Abbas: “We Support The French Initiative. Israel Must End Its Occupation” 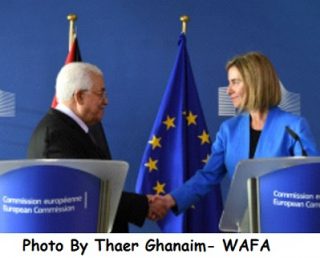 Palestinian President Mahmoud Abbas stated during a press conference in Brussels, on Wednesday evening, that the Palestinian Authority supports the “French Initiative,” and all the efforts by the European Union, aiming at reaching a comprehensive peace agreement.

His statements came during a press conference with Federica Mogherini, the High Representative of the European Union for Foreign Affairs and Security Policy, Vice-President of the European Commission.

Abbas expressed his gratitude to the European Union for its continued support to the Palestinian Authority, and thanked France for its efforts to reach a comprehensive peace agreement in coordination with European countries.

The President also thanked the Quartet Committee, Arab countries, and all states that participated in the Paris conference earlier this month.

“We are seeking real and comprehensive peace that guarantees security for all, and leads to the full Israeli withdrawal from all the occupied territories,” Abbas said, “We want our people to live in peace in their independent, sovereign state, next to a secure Israel.”

Abbas added that if Israel is really interested in peace and security with the Palestinians, and all Arab neighbors, it must end its illegal occupation, and its escalating violations.

“Israel must end the occupation, withdraw from our land, and fully recognize our legitimate, internationally guaranteed rights,” the Palestinian President said, “Only then, the implementation of the Arab Peace Initiative of 2002, and all related initiative, United Nations and Security Council resolutions, will be possible.”