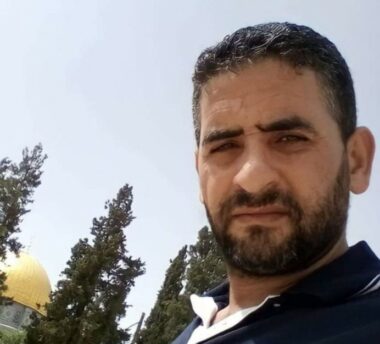 The Palestinian Detainees’ Committee has reported that Hisham Abu Hawwash, 40, held by Israel under the arbitrary Administrative Detention orders without charges, is ongoing with the hunger strike he started 124 days ago, despite his life-threatening condition.

The Committee stated that Abu Hawwash is at the infamous Ramla prison clinic that lacks basic supplies and physicians, especially specialists, and is in a serious condition.

It added that Abu Hawwash suffers a serious weight loss, constant fatigue, pain, dizziness, migraine, and cannot stand or even sit in addition to several other complications.

The Committee expressed fears that Abu Hawwash could suffer a serious heart defect, irreversible complications in the nervous system, in addition to kidney and liver failure, collapsed lungs, and even death.

The detainee is determined to continue his strike demanding freedom, especially since he is not facing charges, yet Israeli courts did not only deny appeals for ending his detention and releasing him but also issued a new order keeping him under Administrative Detention for four additional months that can be renewed.