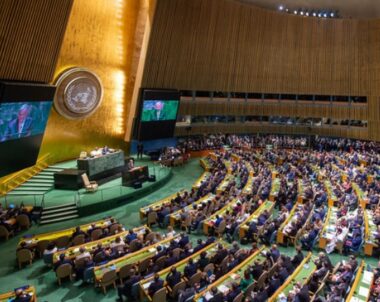 NEW YORK, Friday, December 17, 2021 (WAFA) – Some 156 member states of the UN General Assembly have voted in favor of a resolution affirming the sovereignty of the Palestinian people over their natural resources.

The draft resolution affirms the permanent sovereignty of the Palestinian people in the Occupied Palestinian Territory, including East Jerusalem and of the Arab population in the occupied Syrian Golan over their natural resources.

The resolution also calls on Israel, the occupying power, to cease the exploitation, damage, cause of loss or depletion and endangerment of natural resources in the Occupied Palestinian Territory, including East Jerusalem, and in the occupied Syrian Golan.

The resolution affirms that Israel’s construction of the apartheid wall and settlements in the occupied West Bank, including East Jerusalem, constitutes a violation of international law, and deprives the Palestinian people of their natural resources, calling on Israel to abide by the legal advisory opinion of the International Court of Justice relating to the illegitimacy of the apartheid wall.

The resolution also reaffirms the call made by the Security Council in its resolution 2334, in which it called on states to distinguish between the territory of the State of Israel and the Israeli-occupied Palestinian territories.