Half Of Al-Walaja Homes Face Threat Of Demolition 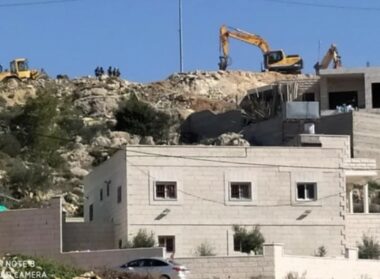 Ibrahim al-A’raj, a member of the Follow-Up Committee for homes threatened by Israel demolition orders, stated that half of the homes in the Ein Jweiza neighborhood in al-Walaja, northwest of Bethlehem, are facing the threat of demolition by the Israeli occupation authorities.

Al-A’raj added that there are standing demolition orders against fifty homes in Ein Jweiza, including 38 homes that received a temporary injunction from the Israeli High Court, halting, but not stopping, the demolition for three years.

He added that many of the threatened homes received demolition orders a few years ago, and the appeals are still pending.

“The Palestinians have been appealing the Israeli court to provide a structural map of their town so that they can go through the legal procession of filing and obtaining permits for their properties,” Al-A’raj said, “However, the so-called Regional Committee in Jerusalem, denied the appeals in the year 2018, and set December, 26th 2021, as the date for a final ruling that could determine the fate of the Palestinian homes.”

“Implementing the demolition orders means destroying half of the homes in Ein Jweiza, and therefore, displacing and removing of the Palestinians, “he said, “This is similar to the constant violations against the Palestinians in al-Khan al-Ahmar, and in Sheikh Jarrah neighborhood in Jerusalem, where at least forty homes are facing the threat demolition or confiscation.”

While Israel continues to build and expand its illegal colonies in occupied Palestine, in direct violation of International Law, the Fourth Geneva Convention, and various international resolutions, the Palestinians in and around East Jerusalem, and the rest of Area C %61 the occupied West Bank), continue to be denied construction permits, in addition to the excessively prohibitive costs of the applications.