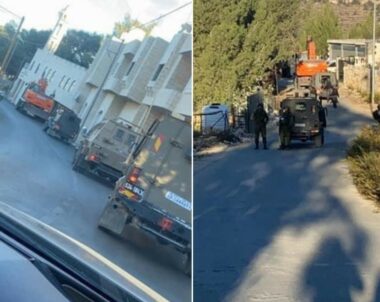 Israeli soldiers demolished, Tuesday, three Palestinian homes in the al-Walaja village, west of Bethlehem in the occupied West Bank, allegedly for being built without permits.

Khader al-A’raj, the head of al-Walaja Village Council, said the soldiers invaded the Ein Jweiza area in the village, and demolished three homes, each about 80 square/meters, owned by Tareq Nasr Abu at-Teen and his brother Ahmad, in addition to their cousin Mohammad Hussein Abu at-Teen.

He added that the is alleging that the three homes, inhabited by the families, were constructed without permits from the Civil Administration Office, run by the Israeli occupation army in the West Bank, although they were permitted by the Village Council.

It is worth mentioning that Israel previously demolished the home of Tareq Abu at-Teen in the same area before he rebuilt it to house his family.

Ein Jweiza is subject to ongoing Israeli violations, including the demolition of dozens of homes, in addition to many current demolition and halt construction, orders.

The demolitions come to allow for the expansion and construction of Israel’s illegal colonies, built on Palestinian lands.

The Israeli violations against al-Walaja started in the 1980s when Israel implemented its plans to annex the Palestinian lands to build its illegal colonies, by denying all construction permits filed by the Palestinians, in addition to dividing the lands, zoning and designating large areas as “green zones,” to prevent the Palestinians from using them, not to mention surrounding them with the illegal Annexation Wall.