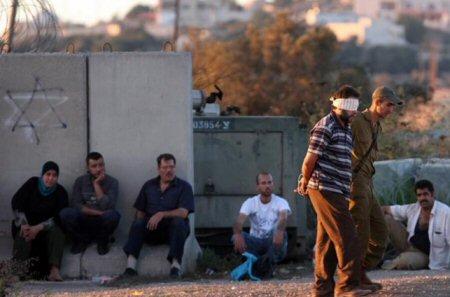 Israeli soldiers, on Saturday, briefly detained a local activist who filmed the fatal shooting of a Palestinian worker earlier in the morning in the southern occupied West Bank city of Hebron.

The Israeli army alleged that Sabarneh, who worked in construction in the area, attempted to run soldiers over with a bulldozer. However, no injuries were reported among the soldiers.

Jaber denied the Israeli army’s account, saying that “Sabarneh was driving a Bobcat excavator while another worker walked next to him, Israeli soldiers asked them to stop when he was at least 10 meters away from them, the walking worker stopped, but Sabarneh apparently did not hear the soldiers and continued his way so they opened fire at him until he was killed.”

Last week, Israeli lawmakers proposed a new bill in the Israeli Knesset that would criminalize the photographing or recording of Israeli soldiers while on duty.

The bill was proposed with the support of right-wing Israeli Defense Minister Avigdor Lieberman, and if passed, those found in violation of the law could face a prison sentence of up to five years.

Palestinian Forced To Demolish His Home In Occupied Jerusalem