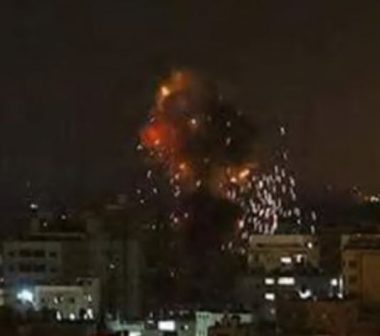 The Israeli Air Force fired, overnight, many missiles targeting fifteen sites in the Gaza Strip, reportedly after several homemade shells were fired from Gaza into nearby Israeli areas.

Media sources in Gaza said that army fired missiles into a site, run by an armed resistance group, believed to be al-Qassam Brigades, the armed wing of Hamas.

The sources said Israeli F16 fighter jets, and armed drones, fired three missiles into the al-Hashashin area, west of Rafah, in the southern part of the Gaza Strip.

The army also fired three missiles into al-Yarmouk and Ein Jalut sites, in southern Gaza, in addition to firing missiles at other targets, including an observation post, east of Gaza city, and two targets in central and northern Gaza.

There have been reports of property damage in the targeted areas, but no casualties.

The army also claimed some Palestinians attempted to breach the border fence, and hurled grenades at military infrastructures, in addition to launching burning kites setting several fields with fire.

The army also said that one if its targets was what it called Hamas naval post, in northern Gaza, and held the movement responsible for the escalation.

On Saturday, the soldiers killed a Palestinian worker, Rami Wahid Hasan Sabarna, 36, in Hebron, in the southern part of the occupied West Bank, while he and other workers were conducting work for the Hebron City Council to rehabilitate and expand a road near the Ibrahimi Mosque.

On Friday, the soldiers a young Palestinian woman, a volunteer medic identified as Razan Ashraf Najjar, 22, and injured 100 Palestinians, including 40 with live fire, in the Gaza Strip.