Activists Demonstrate against AIPAC Conference in West Bank and US 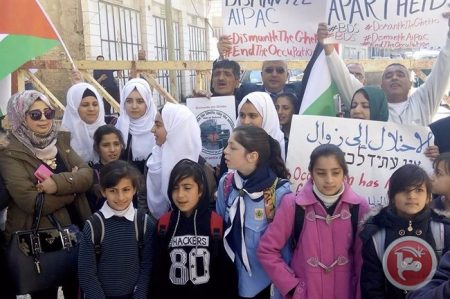 The National Campaign to Lift the Closure of Hebron organized a protest in the southern occupied West Bank city, on Sunday, to denounce the policies of the American Israel Public Affairs Committee (AIPAC), as the lobby held its annual policy conference in the United States.

Protesters held Palestinian flags and signs calling for the dismantlement of AIPAC and condemning its activities in Israel and the occupied Palestinian territory, while Israeli forces stationed in the area fired sound bombs towards the demonstrators.

Hisham Sharabati, a coordinator of the Hebron Defense Committee, said that the protest was organized to condemn the pro-Israel lobby’s support of the Israeli “colonial racist regime” and the military occupation of the Palestinian territory in violation of international law.

Badi Dweik, an activist with the group Human Rights Defenders, said it was time to stop AIPAC’s support of Israeli policies such as the segregation of Hebron’s Old City, notably in the neighborhood of Tel Rumeida and Shuhada Street.

According to Ma’an News Agency, some 800 notoriously aggressive Israeli settlers now live under the protection of the Israeli military in the Old City, surrounded by more than 30,000 Palestinians, as Palestinian residents of the neighborhood face a large Israeli military presence on a daily basis, with at least 20 checkpoints set up at the entrances of many streets, as well as the entrance of the Ibrahimi Mosque.

Meanwhile, representative of the Committee Against the Wall and Settlements Yunis Arrar expressed appreciation for the solidarity of American activists with Palestinians, as proven by their participation in the protest in Hebron — as well as in a demonstration in Washington, DC outside of the AIPAC conference.

Russia Today (RT) reported that Jewish protesters are blocking the entrance to the annual pro-Israel American Israel Public Affairs Committee (AIPAC) conference at the Washington Convention Center, calling for an end to the Israeli occupation of Palestinian territory.
The three-day conference began Sunday, in what AIPAC describes as the “largest and most important advocacy day” for the pro-Israel community. Up to 15,000 people are expected to attend the event, according to organizers, and its speakers on Sunday included former British Prime Minister Tony Blair and Rwandan President Paul Kagame.
Protesters have formed a human blockade, preventing access at both entrances of the convention center after marching from Franklin Square.
03/19/17 The UN Report Israel Does Not Want You To Read