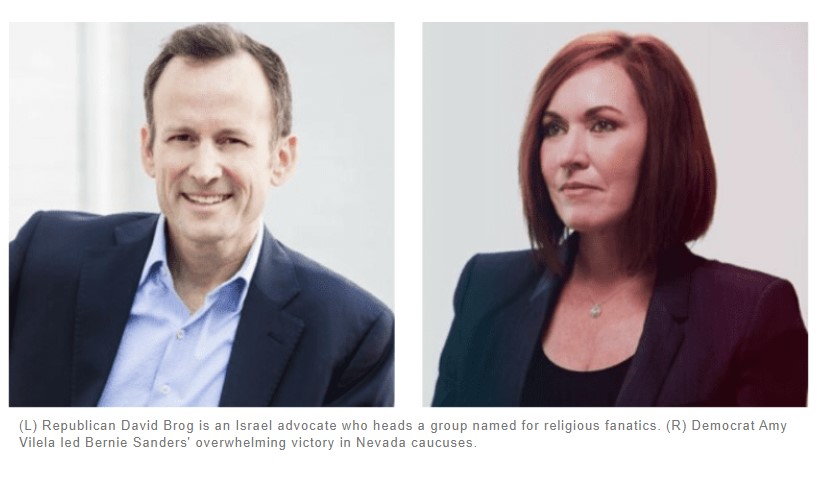 Depending on which candidates win the Republican and Democratic primaries in Nevada on June 14th, there’s a possibility that Israel partisan David Brog could face off against grassroots Democrat Amy Vilela, who supports Palestinian human rights

In this case, David is the Goliath – especially since major Nevada media are owned by his backer…

By Alison Weir, Israel-Palestine News: The Jewish Telegraphic Agency (JTA) reports that David Brog, “a longtime protege of the Adelsons, the Las Vegas-based Republican Jewish kingmaker couple, is running for Congress in Nevada.”

The Adelsons are known for their devotion to Israel and massive campaign donations to Republicans on Israel’s behalf. Sheldon Adelson, a casino magnate who passed away last year, famously said that he regretted serving in the U.S. Army instead of the Israeli military (video here).

His Israeli wife Miriam is now carrying on the couple’s pro-Israel funding of U.S. politicians and organizations. She is expected to be the GOP’s biggest donor in 2022 and 2024.

Brog, who is similarly devoted to Israel, is a Jewish American attorney who founded and for many years ran “Christians United for Israel (CUFI).”

Brog, whose cousin is former Israeli Prime Minister Ehud Barak, previously practiced law in Tel Aviv and currently heads the “Maccabee Task Force”, a tax exempt organization that uses its $16 million budget to promote Israel on American campuses. Brog is paid $400,000 for this work on behalf of a foreign government.

(The group his organization is named after, the Maccabees, were ancient Jewish warriors who revolted against their rulers. While some say they were not extremists, others point out that the Maccabees slaughtered Jewish Hellenists and following their victory, forcibly converted the neighboring population to Judaism, including forced circumcisions.)

Brog is running in the Republican primary to represent Nevada’s 1st Congressional District. If he wins, he will then face whoever is victorious in the Democratic primary, where a non-establishment candidate, Amy Vilela, is threatening the incumbent. It is this challenger who may have motivated Brog’s candidacy.

Democratic incumbent Dina Titus is a six-term politician with a solid pro-Israel record. Although her main passion appears to be Greece, Titus boasts a Congressional record of supporting virtually every bill that Israel partisans desire. She’s endorsed by the powerful PACs Pro-Israel America and Democratic Majority for Israel (DMFI).

Israel advocates appear worried about Vilela, and Jewish Insider reports that DMFI is “hoping to fend off” Vilela’s challenge. ( has close ties to AIPAC.)

The mother of four children and married to an Air Force officer, Vilela has a compelling back story. She overcame poverty and homelessness to become the first member of her family to graduate from college and eventually became a CFO. Vilela entered politics when one of her children died after being denied proper care due to her health insurance status.

In an interview with The Hill, Vilela said she was drafted to run for Congress because of her recent activism organizing food drives and supporting front line workers during Covid, while other leaders were “nowhere to be found.”

All three focus on domestic issues, Serrano and Turner exclusively, and none seem to have taken a public stand on Israel-Palestine. This lack of Israel emphasis will not endear them to Israelists, who require candidates to pledge support for Israel.

Robertson may be particularly displeasing to Israel advocates. A retired Army Colonel who served in Iraq and Afghanistan, Robertson may be skeptical of wars promoted by neocons on behalf of Israel. On his website he emphasizes: “We should only send troops into a foreign country when there is a significant threat to American interests.”

Outlier Turner could also be sufficiently independent to buck the establishment pro-Israel orthodoxy in favor of the pro-Palestinian views held by previous black conservative writer George Schuyler, who considered Zionism  “hogwash … steeped in a religious and racial exclusiveness” and wrote: “The same people who properly condemned and fought against German, Italian and Japanese imperialism … now rise to the vociferous defense of Zionist imperialism which makes the same excuse of the need for ‘living space’ and tries to secure it at the expense of the Arabs with military force financed and recruited from abroad.”

While Brog has entered the race late, he is likely to dominate it, as his billionaire connections and Israel advocacy make it probable that he will be able to tap into massive funding and a national network of donors that will dwarf the resources of his opponents.

And it won’t hurt that some years ago Sheldon Adelson secretly bought the largest circulating daily newspaper in Nevada, which is also responsible for a number of other publications in the state.

Alison Weir is executive director of If Americans Knew, president of the Council for the National Interest, and author of the best selling “Against Our Better Judgment: The Hidden History of How the U.S. Was Used to Create Israel.”