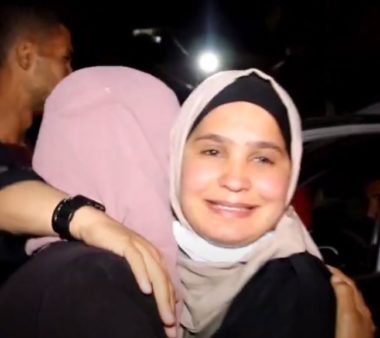 The Israeli authorities released, Monday, a young Palestinian woman, a mother, identified as Shorouq al-Badan, 25, after holding her under arbitrary Administrative Detention orders, without charges or trial, for nearly 12 months.

Al-Badan was welcomed by her family, including her children who were unable to see her throughout the duration of her imprisonment, as well as dozens of residents who celebrated her release.

Al-Badan was abducted by the Israeli army on July 15th, 2019, after the soldiers stormed and ransacked her home in Teqoua’ town, southeast of Bethlehem, south of occupied Jerusalem in the West Bank.

She was first held in the HaSharon Israeli prison before she was moved to the ad-Damoun prison.

Israel is still holding captive more than 40 Palestinian women, including Khaleda Jarrar, a democratically elected legislator and a member of the Political Bureau of the leftist Popular Front for the Liberation of Palestine (PFLP).

Among the imprisoned women are the oldest serving Amal Jihad Taqatqa, who was abducted in 2014, and was sentenced to seven years, in addition to Shatila Suleiman Abu Eyada, from Kufur Qassem, and Shorouq Salah Dweiyat, from occupied Jerusalem, each of them was sentenced to sixteen years in Israeli prison.