After Demolishing A Home, Israeli Soldiers Seriously Injure A Palestinian Near Jerusalem 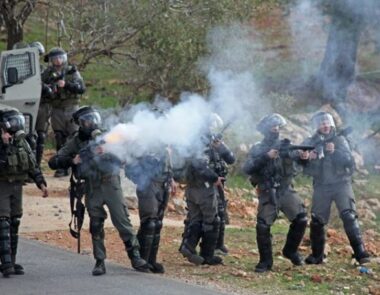 Israeli soldiers shot and seriously injured, Tuesday, a young Palestinian man during protests that erupted in the as-Sal’a neighborhood, in Jabal al-Mokabber, south of occupied East Jerusalem, after the army demolished an under-construction six-story residential building.

Media sources said the soldiers attacked dozens of Palestinian protesters, who marched in condemnation of the Israeli escalation, including the demolition of homes, and fired many live rounds, rubber-coated steel bullets, gas bombs and concussion grenades at them.

They added that the soldiers shot a young man, identified as Mohammad Moammar Ja’abis, in his twenties, with a live round in the chest.

Palestinian medics rushed the seriously wounded young man to the al-Makassed hospital, in Jerusalem, before he was immediately admitted to surgery and intensive care. His condition remains critical.

In addition, the soldiers surrounded the hospital in an attempt to abduct the wounded man and were still there at the time of this report.

The escalation started in the town, on Tuesday morning, after the soldiers invaded the as-Sal’a neighborhood, and demolished the six-story under-construction building owned by a local Palestinian, identified as Aziz Jamil Ja’abis.