Israeli Soldiers Demolish An Under Construction Building in Jerusalem 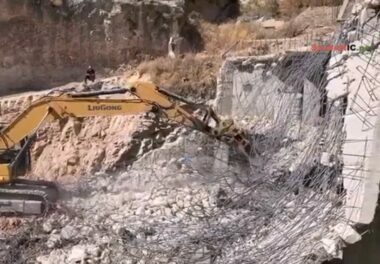 Eyewitnesses said many army jeeps and police vehicles, accompanied by three bulldozers, invaded the neighborhood after isolating it and demolished the six-story under-construction building.

They added that the demolition building is owned by a local Palestinian, identified as Aziz Jamil Ja’abis, and was being constructed on his land.

Many Palestinian youngsters protested the invasion, and hurled stones at the army jeeps and bulldozers, while the army fired gas bombs, concussion grenades, and rubber-coated steel bullets.

The Israeli army claimed the building was being constructed without a permit from the City Council, in occupied Jerusalem.

The policy of home demolitions is an act of collective punishment illegal under International Law and the Fourth Geneva Convention.