Palestinian Killed After Being Rammed By Israeli Settler Vehicle Near Tulkarem 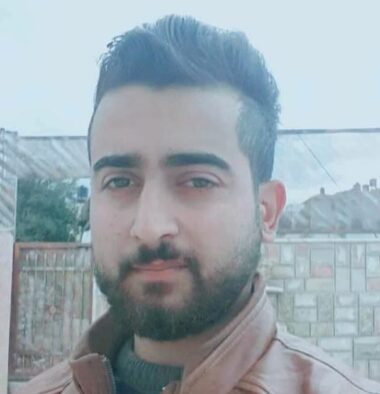 A young Palestinian man was killed on Saturday evening, August 15th, 2020, when a speeding Israel colonists’ car struck him near a military roadblock, south of Tulkarem, in northern West Bank.

The Palestinian has been identified as Eqab Bashir Darawsha, 21, from Tallouza village, north of Nablus, in the northern West Bank.

Media sources said the Palestinian, a day laborer, had crossed through a breach in the illegal Israeli Annexation Wall, as he and many other workers were trying to get into Israel for work.

Many Palestinian workers take the risk of going through a gap in the Annexation wall, or sneaking into Israel through mountains and hills, because they are suffering from hunger, and feel they need to take the risk of crossing the Israeli-created barrier  to provide for their families. They may have applied for and been denied entry permits  by the Israeli military that controls all aspects of their lives in the West Bank.

Israeli settlers who drive on bypass roads, including the one who struck the Palestinian worker, usually drive at high speeds when driving on the Jewish-only segregated bypass roads.

After being struck by the car, the Palestinian was rushed to Rama Medical Center in Israel, where he succumbed to his wounds.

A Palestinian who lives near where the incident took place stated that the Palestinian went through a gap in the Annexation Wall, and was struck by the speeding Israeli car just as he was trying to cross the road.

One day after the incident, Israeli soldiers shot and injured Palestinian workers near the gate of the Annexation Wall, west of Far’un town, south of Tulkarem.

In that incident, a Palestinian, Soheil Daoud ‘Obeit, 26, was shot in his leg before Palestinian medics rushed him to a local hospital.

Such incidents are frequent and have led to many Palestinian casualties.