UAE Dictatorship Sells Out Palestinian Rights Through Agreement With Israel 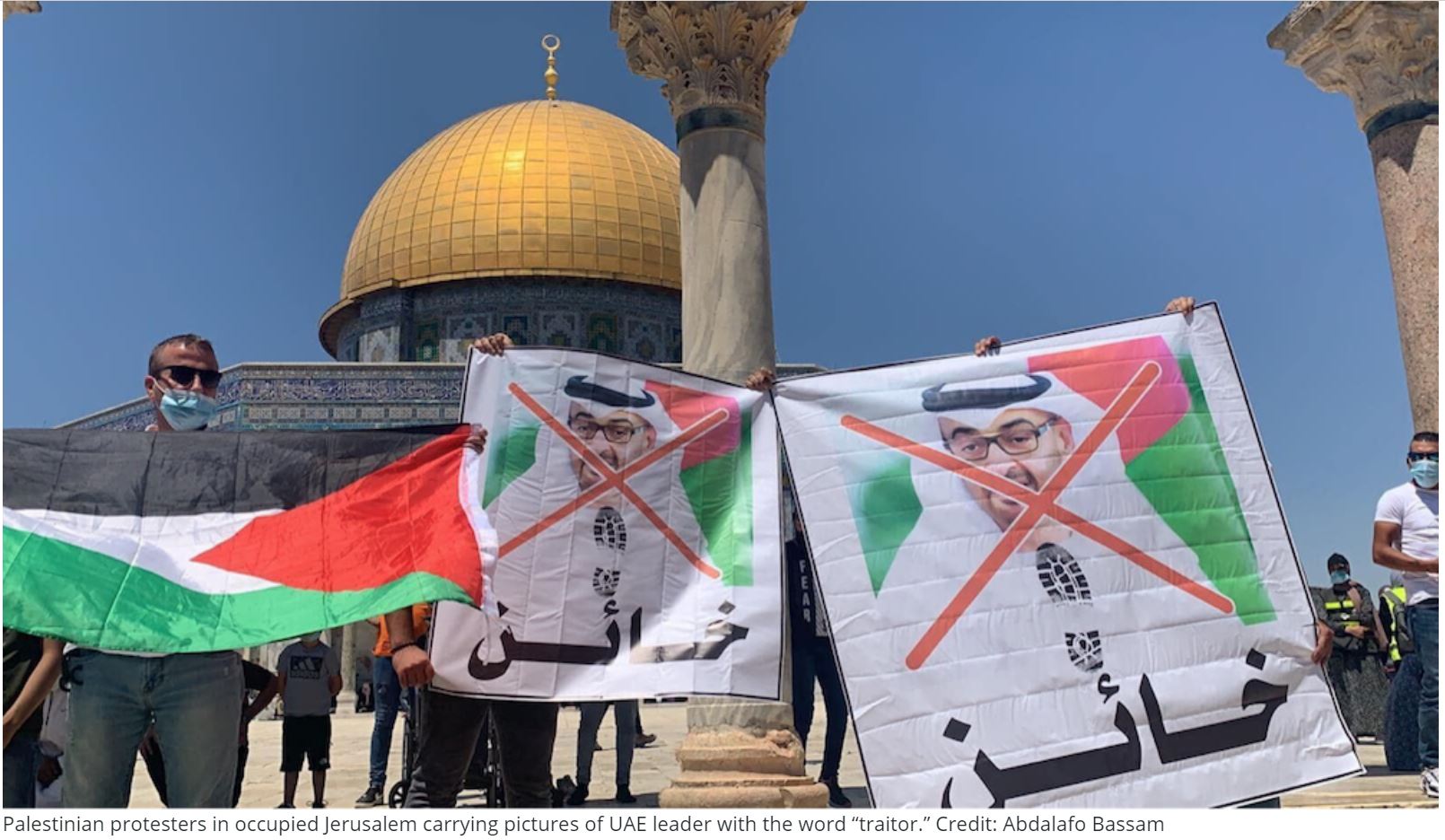 By The Palestinian BDS National Committee (BNC): The Boycott, Divestment and Sanctions (BDS) movement strongly slammed in a statement the recent normalization agreement between the United Arab Emirates (UAE) and Israel, calling on Emiratis to boycott any Israeli activity in the country.

“Palestinian civil society stands with the silenced majority in the United Arab Emirates and the Arab world in strongly condemning the agreement reached between the despotic rulers of the United Arab Emirates and Israel, with support from the Trump White House,” the statement said. “This is the UAE regime’s gravest betrayal of the struggle for Palestinian liberation and self-determination.”

The deal was announced as Israel was once again bombing the besieged and impoverished Gaza Strip and attacking Palestinians in the West Bank, signaling that it would do nothing to diminish Israel’s brutal assaults on the Palestinian people, said BDS.

“The UAE regime’s claim that the price for its violation of the central principle among Arab peoples of commitment to the Palestinian cause was Israel’s freeze of its plans to formally annex parts of the occupied Palestinian territory is a lie. After the agreement had been reached, (Israeli Premier Benjamin) Netanyahu announced that the annexation plan is still alive but has been temporarily delayed to allow him to reach an agreement with Trump on how best to implement it.”

BDS said the UAE claim is a sham. “Israel’s theft of Palestinian land and its illegal settlement enterprise are continuing unabated, entrenching its de facto annexation and apartheid regime.”

Israel’s regime of occupation, settler-colonialism and apartheid is celebrating this latest diplomatic breakthrough as badly needed cover for its ongoing war crimes and crimes against humanity against the Indigenous people of Palestine. These include massacres; ethnic cleansing, especially in Jerusalem, the Naqab and the Jordan Valley; the siege of Gaza; home demolitions; destruction of ancient olive groves; destruction or appropriation of cultural and archeological heritage; and denial of fundamental rights protected in international law, it said.

“The Palestinian people, supported by the absolute majority in the Arab world and by people of conscience globally, will continue to resist Israeli oppression and insist on our inalienable right to liberation, self-determination, freedom and dignity in our homeland. We call on people across the globe to escalate boycotts, divestment and sanctions (BDS) campaigns against Israel’s ongoing annexation and apartheid,” said BDS, calling on Emiratis “to boycott any Israeli presence or activity in the country or elsewhere and to refuse to engage with the Israeli embassy or with entities partnering with them and with all complicit Israeli institutions.”

It also called on Arabs in general to continue to actively resist this abject normalization by:

Boycotting all activities, festivals and projects sponsored by the UAE regime, including the Dubai EXPO, the Dubai Shopping Festival, as well as sports, cultural and economic/financial festivals and conferences.

Boycotting and divesting from any Emirati or other corporation that becomes complicit in implementing this normalization agreement with Israel.

Refraining from travel to present-day Israel and the Occupied Palestinian Territory, including the Al-Aqsa Mosque, under this unethical agreement, and from participating in faith washing initiatives that underpin this so-called “Abraham Accord.”