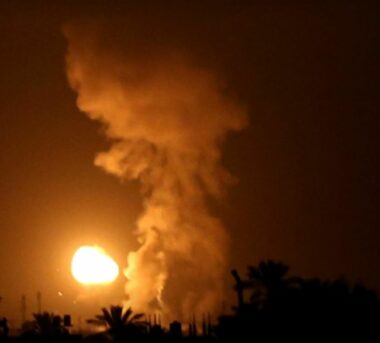 The Israeli Air Force fired, on Tuesday at dawn, several missiles into Palestinian lands, east of Rafah city, in the southern part of the besieged coastal region.

Media sources said the missiles caused excessive property damage to the targeted area, but did not lead to casualties.

They added that the soldiers also fired a few artillery shells into Palestinian lands, near Rafah.

In addition, the soldiers fired live rounds and shells at a site, north of Beit Lahia, in northern Gaza, while the Navy fired a few shells into Palestinian waters nearby.

The Israeli army claimed it fired missiles targeting what it called “an observation post,” run by the al-Qassam Brigades, the armed wing of Hamas.

It added that the attack came “in retaliation to flammable balloons,” reportedly flown from Gaza during the day, and landed near Israeli colonies across the perimeter fence.

On Monday at dawn, the army fired several missiles into two sites in the Gaza Strip, causing damage.