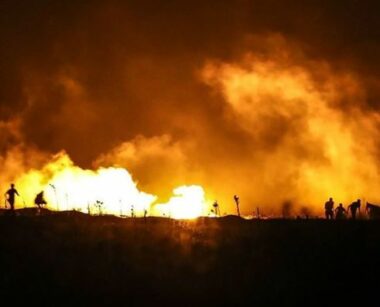 The Israeli army fired, during early dawn hours Monday, several missiles into two sites in the Gaza Strip, causing damage. The army said it was retaliating to flammable balloons reportedly flown from Gaza.

Media sources said the army fired many artillery and tank shells into a site, believed to be run by an armed resistance group, east of Beit Lahia, in northern Gaza.

The attack caused damage to the targeted site, in addition to several surrounding homes and buildings.

The sources added that the army also fired three artillery shells into another site, east of Gaza city, causing damage.

In a statement, the Israeli army claimed it targeted Hamas-run sites in retaliation to flammable balloons, reportedly launched from Gaza, causing 30 fires in Israeli settlements across the perimeter fence.

On Sunday evening, Israeli soldiers fired many live rounds, rubber-coated steel bullets, and gas bombs at Palestinians on lands near the fence, in Abu Safiyya area, east of Jabalia, in the northern part of the Gaza Strip.

One Palestinian was injured after high-velocity gas bombs struck him in the chest, before he was rushed to a hospital.

Local medics also provided treatment to several Palestinians who suffered the effects of teargas inhalation, in addition to cuts and bruises.

It is worth mentioning that the army closed the only trade terminal with Gaza, in addition to preventing the Palestinians from fishing in Gaza territorial waters, this closure also includes barring the entry of fuel.

|Gaza’s only Power Plant to Stop Production by Tuesday|