Army Shoots A Palestinian Near The Annexation Wall Gate, North Of Tulkarem 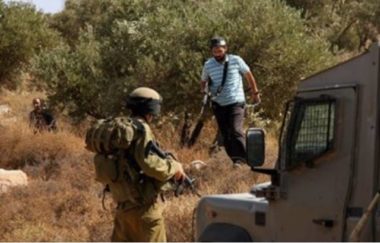 Israeli soldiers shot, Sunday, a young Palestinian man near the gate of the illegal Annexation Wall, north of Tulkarem, in northern West Bank.

Eyewitnesses said the soldiers shot the Palestinian with a live round in one of his legs, as he was trying to cross the gate on his way to work.

Palestinian Red Crescent medics rushed to the scene and moved the young man to a hospital in Tulkarem, where his wounds have been described a stable.

The incident is one of many similar Israeli violations, as the soldiers recently many Palestinians near the gates of the illegal Annexation Wall in that area.

On Sunday morning, the soldiers shot and seriously injured a young Palestinian man in Tulkarem, after the army prevented many families from entering their orchards to harvest their olive trees.

The attack comes amidst seriously escalating Israeli violations against the Palestinians in their orchards, and include frequent assaults by colonialist settlers, illegally squatting on Palestinian lands.