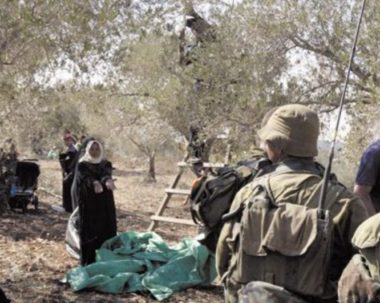 Israeli soldiers shot and seriously injured, on Sunday morning, a young Palestinian man in Tulkarem, in northern West Bank, after the army prevented many families from entering their orchards to harvest their olive trees.

Media sources said the soldiers attacked many Palestinians, and prevented them from entering their olive orchards, and added that the soldiers also fired many live rounds at them.

They stated that one Palestinian was shot with a live Israeli army round and suffered a life-threatening injury.

The attack comes amidst seriously escalating Israeli violations against the Palestinians in their orchards, and include frequent assaults by colonialist settlers, illegally squatting on Palestinian lands.