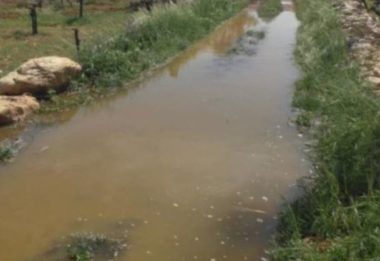 Several illegal extremist Israeli colonists invaded, Monday, a Palestinian olive orchard, and flooded it with wastewater, in the al-Jab’a village, southwest of Bethlehem, south of occupied Jerusalem in the West Bank.

Thiab Masha’la, the head of al-Jab’a Village Council, said the Israeli assailants came from Beit Ayin illegal colony, which was built on private Palestinian lands south and west of the village.

He added that the soldiers flooded five Dunams (1.23 Acres) of olive orchards in Wad al-Khanzeer area, and that the trees are owned by the family of the late Mohammad Ibrahim Abu Loha.

Masha’la stated that the Palestinians cannot enter the orchards in that area without a prior permit from the military, because they are isolated behind the illegal Annexation Wall, and that they discovered their olive orchard was flooded with wastewater from the nearby colony.

The attack is the latest in a series of ongoing and escalating violations targeting the Palestinians, their homes and lands, and their holy sites.