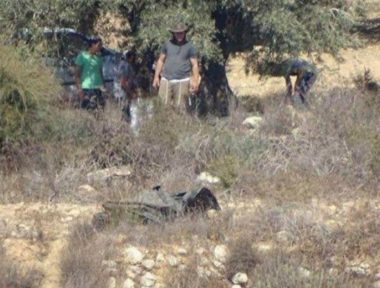 In yet another violation, several illegal Israeli colonialist settlers, illegally squatting on Palestinian lands near the northern West Bank city of Nablus, invaded a Palestinian olive orchard, and harvested nearly 300 trees before stealing the produce.

He added that the assailants harvested and stole the produce of nearly 300 Palestinian olive trees, before fleeing to their colony.

The official also stated that, once the Palestinians were able to enter their orchards, isolated behind the Annexation Wall, some colonists attacked them and forced them away, while the soldiers did not intervene.

On Saturday, the soldiers invaded Palestinian olive orchards between Burin and Huwwara towns, south of Nablus, and forced the Palestinians out, in addition to threatening them with “binging the settlers to attack them.”

It is worth mentioning that the Palestinians in Nablus governorate are not allowed to enter more than 3500 Dunams of their olive orchards, except for a few days a year, after prior coordination and approval from the military.

Even when they receive the permits, the Palestinians and are forced to wait until the soldiers open the gate for them, and sometimes the soldiers do not open it at all or force them to wait for long periods.