Soldiers Force Palestinians Out Of Their Olive Orchards In Nablus 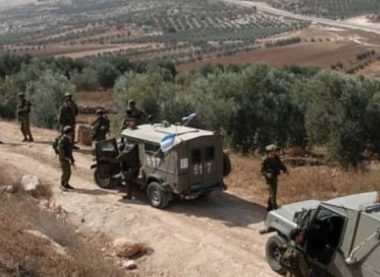 Israeli soldiers invaded, Saturday, Palestinian olive orchards between Burin and Huwwara towns, south of the northern West Bank city of Nablus, and forced the Palestinians out, in addition to threatening them with “binging the settlers to attack them.”

Eyewitnesses said the soldiers invaded the orchards near the illegal Yitzhar colony, which was built on private Palestinian lands, and attacked the families.

The soldiers even told the families that if they do not leave, they will bring the colonists from Yitzhar, known for constantly attacking the Palestinians and their lands, to assault them.

The olive harvest season in the occupied West Bank is always accompanied by dozens of Israeli violations by both the soldiers and the illegal colonists.

There have numerous violations this olive harvest season alone, including twelve just recently in Qaryout village, south of Nablus.

It is worth mentioning that the Palestinians in Nablus governorate are not allowed to enter more than 3500 Dunams of their olive orchards, except for a few days a year, after prior coordination and approval from the military.

Even when they receive the permits, the Palestinians and are forced to wait until the soldiers open the gate for them, and sometimes the soldiers do not open it at all or force them to wait for long periods.