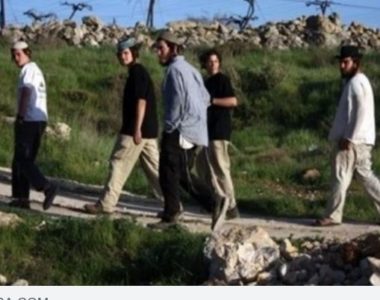 The Palestinians, from the local Atatra family in Ya’bad, said they were attacked by the colonists near Thaher al-‘Abed village.

They added that the assailants hurled stones at them, and attacked them with clubs, forcing them out of their lands, before picking Palestinian olive trees and stealing the produce.

It is worth mentioning that the colonists recently illegally occupied a nearby hill and installed a livestock barn.

A similar attack was carried out by colonists from Mabo Dothan illegal outpost, which was built on Palestinian lands in Ya’bad town, targeting locals from Abu Bakr family.

Also Wednesday, the colonists invaded Palestinian orchards in Qaryout village, south Nablus, and forced the residents out, for the fourth consecutive day.

The attacks come while groups of illegal Israeli colonialist settlers continue to invade Palestinian olive orchards, cut trees and assault the villagers, in several parts of the occupied West Bank.

The violations always witness a serious escalation every year during the olive harvest season in occupied Palestine.