For The Fourth Day, Israeli Soldiers Force Palestinians Out Of Olive Orchards Near Nablus 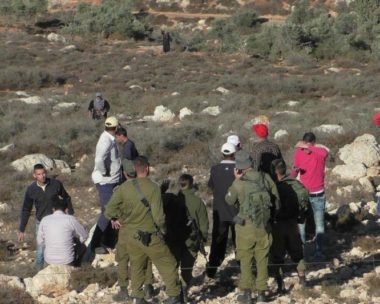 Daghlas stated that the soldiers attacked the Palestinians, in their orchards in their western part of the village, and fired several gas bombs and concussion them at them.

He added that the soldiers forced the Palestinians out of their orchards under the pretext of not coordinating the entry into their own lands with the army.

Daghlas stated that this attack was carried out for the fourth consecutive day, although the Palestinians do not need a prior arrangement or a permit from the Israeli side to enter their orchards in that area.

The attack comes while groups of illegal Israeli colonialist settlers continue to invade Palestinian olive orchards, cut trees and assault the villagers, in several parts of the occupied West Bank.

The violations always witness a serious escalation every year during the olive harvest season in occupied Palestine.