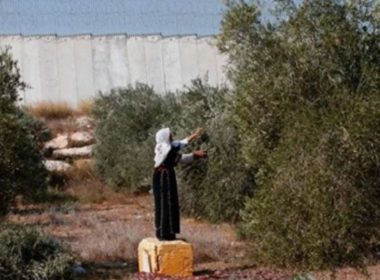 The Palestinians Ministry of Foreign Affairs and Expatriates issued a statement, Sunday, strongly denouncing the latest Israeli violations, carried out by both soldiers and illegal colonialist setters, against the Palestinians and their olive orchards, and stating that this serious escalation that is part of new plans to build and expands colonies.

The Ministry issued its statement after a series of assaults carried out by the illegal colonists and the soldiers against the Palestinians and international activists, picking olive trees in Palestinian orchards in the occupied West Bank, especially in the northern West Bank governorate of Nablus, in addition to Jenin, Tulkarem, Ramallah and Bethlehem, among other areas.

It stated that the fact that after the colonists invaded Palestinian olive orchards in Qaryout village, southwest of Nablus, and assaulted the locals and the international activists, who were helping them in picking their trees, Israeli soldiers followed this violation with another attack against them, instead of removing the assailing illegal colonists, is yet another proof of the alternating roles they play in their violations.

The Ministry added that the attacks were carried out three days in a row, and aim at preventing the Palestinians from entering their olive orchards so that Israel can implement its plans to build and expand its illegal colonies on privately-owned Palestinian lands, southwest of Nablus.

The planned Israel constructions are part of a much larger colonialist plan, which aims at isolating the northern part of the occupied West Bank, from its central and southern parts.

“These violations and the constant assaults by the illegal colonists have been ongoing for many years, and significantly escalate during the olive harvest season,” the Ministry said, “They aim at creating new facts on the ground by building and expanding the colonies, constructed on occupied lands in direct violation of International Law and the Fourth Geneva Conventions.”

It also denounced the constant Israeli pretenses and justifications to these violations, as they aim at preventing the Palestinians from entering their orchards, prior to annexing them for its illegal colonialist activities.

“Our people should not need an Israeli permit to enter their own lands and orchards,” the Ministry said, “The Israeli measures violate International Law and all related treaties.”

It also said that the silence of the International Community, and some “human rights” groups, is shameful, especially amidst the escalating Israeli crimes and violations, and pointed out the fear of some countries to utter any criticism of Israel, which makes them unfit to even talk about achieving comprehensive peace and justice, or even about human rights.

In addition, the Ministry called on the United Nations Secretary-General, António Guterres, to speed up the implementation of the international protection system to the Palestinians, subject to escalating violations by both Israeli soldiers and the colonialist settlers.