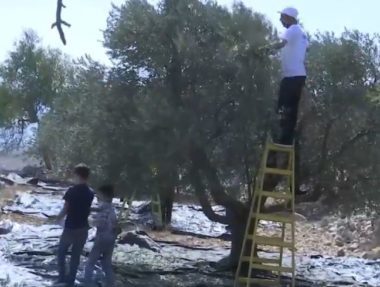 Tha Maan News agency qouted Ziad Salah, the coordinator of the Palestinian Agricultural Relief Society, stating that the colonists hurled stones at the Palestinians and the solidarity activists, in addition to attacking homes and cars in the village, causing property damage.

Salah said that the attack took place during a nonviolent activity for aiding the Palestinians in picking their olive trees, dubbed as “We Are With You,” and meant to help the villagers, subject to frequent assaults and violations by both the illegal colonists and the soldiers.

He also stated that the soldiers stopped a bus, transporting local and international activists into the Palestinian orchards.

The coordinator added that in its “We Are With You” Campaign, the Palestinian Agricultural Relief aims at helping the Palestinians in lands and orchards near the illegal Annexation Wall, including lands Israel intends to illegally annex for its wall and colonies.

The villagers in those areas are subject to constant assaults and violations by the soldiers and the illegal fanatic colonists.

Such attacks always witness a sharp escalation by the illegal colonists during the olive harvest season.