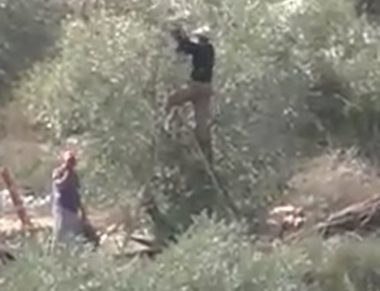 An armed illegal fanatic Israeli colonist attacked, Monday, many Palestinians while picking their olive trees, in their orchards, in Shoufa village, east of the northern West Bank city of Tulkarem.

Tahseen Hamed, a local nonviolent activist, and a farmer in Shoufa, said an armed colonialist settler from Avnei Hefetz illegal colony, which was built on private Palestinian lands, invaded an olive orchard and attacked Mahmoud Abdul-Karim Droubi, along with his brothers, while picking their olive trees.

Hamed added that the assailant also threatened to shoot them if they do not leave their olive orchards.

The Israeli assailant also brought dogs with him and forced the Palestinians out of their lands.