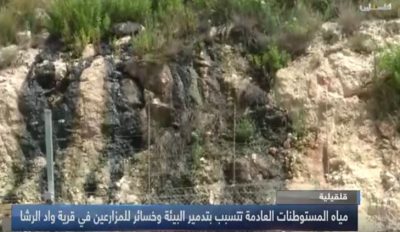 The flooding of waste and toxic water from the Industrial Zone of the illegal Alfie Menashe Israeli colony, which was built on Palestinian lands near Qalqilia, in northern West Bank, continues to devastate Palestinian agricultural lands, and the environment, in Wad ar-Rasha village, exposing the residents to serious health risks.

Representative of Wad ar-Rasha Village in Hableh Local Council, Amjad Odah, told Palestine TV the flooding of toxins, chemicals and wastewater into the Palestinian lands is seriously increasing, flooding the agricultural lands, and passing near homes, forcing many farmers away from their lands.

“They first built their chemical plant and illegal colony, on our lands, and now are poisoning them and us,” Odah added, “They are exposing the Palestinians to serious health risks, in addition to harming the environment with these dangerous chemicals and toxins.”

The toxins also contaminated the agricultural soil, and the irrigation table in the area, inflicting serious damage to the environment in addition to exposing the Palestinians and wild life to diseases.

Bassem Odah, a local farmer, said the toxins are burning the roots of the Palestinian olive trees, and other plants they have.

“Besides all of this harm, we stopped letting our children play in our lands in that area, because we don’t want them to be sick, or get into the contaminate natural water pools in the valley,” he added.

Wad ar-Rasha is one of the most devastated villages by the illegal Israeli policies, allowing the illegal colonies to operate chemical plants that constantly flood their waste the Palestinian lands.

It also lost 460 Dunams of its 500 Dunams lands to the illegal construction and expansion of the colonies, while the residents are literally fighting for their own existence there.