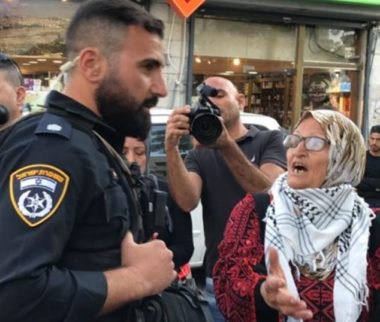 Updated: Israeli soldiers resorted, Saturday, to the excessive use of force against dozens of Palestinians, holding a nonviolent protest in solidarity with the hunger-striking detainees in Israeli prisons, and abducted a journalist, in occupied Jerusalem.

Media sources in Jerusalem said the soldiers attacked dozens of Palestinians who were nonviolent protesting in Salahuddin Street, in Jerusalem.

They stated that the soldiers, and mounted police officers, assaulted and clubbed several nonviolent protesters, and started pushing them away.

The soldiers also abducted one journalist, identified as Ahmad Safadi, and took him to an interrogation facility.

It is worth mentioning that, earlier Saturday, the soldiers invaded the home of the abducted journalist in Salahuddin Street, and searched it.

On Thursday evening, the soldiers resorted to the excessive use of force against Palestinians, holding a nonviolent activity in solidarity with hunger-striking detainees, in Bab al-‘Amoud area in Jerusalem, and abducted three, including one lawyer.

It is worth mentioning that four detainees, held under the illegal Administrative Detention orders without charges, remain on hunger strike against their indefinite incarceration without charge or trial, including one who has been consistently refusing food for 97 days in a row, the Palestinian Prisoners Commission said, today.

Palestinian-Jordanian detainee, Hiba al-Labadi, was moved to a hospital due to various complications,but remains determined to continue the strike.

Al-Labadi was arrested upon her arrival at Allenby Bridge crossing with Jordan, on her way into the West Bank, and has been on hunger strike since then, protesting her torture and detention.